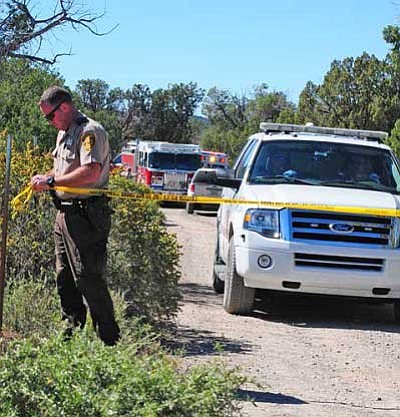 Kathi Sabot/Courtesy photo<br> A deputy cordons off access to the scene of a plane crash at Gunsite Ranch on Friday.

The Yavapai County Sheriff's Office has unofficially identified four people who died in a plane crash at the Gunsite firearms training academy in Paulden Friday.

James Parrish, 57, and his wife Lisa Parrish, 54, both from Terrell, Texas, and Mike Hughes, 65, and wife Joy, 63, of Paulden and Aurora, Colo., were killed when a Cessna 340, six-passenger aircraft owned by James Parrish crashed at about 12:30 p.m. Friday during a flight at Gunsite.

The Gunsite website on Monday published a memorial statement about the four which stated that Mike Hughes was a rangemaster who had taught at Gunsite since 1991. The Parrishes had just completed their 16th Gunsite class.

"We have lost four of our Gunsite family members ... and we are filled with sadness," the website stated.

Sheriff's spokesman Dwight D'Evelyn said witnesses on Friday saw the plane clip some trees and then appear to explode on impact. Some witnesses also said the plane may have struck a radio tower on the Gunsite grounds.

Chino Valley Fire crews, along with Sheriff's personnel, responded to the scene.

FAA and National Transportation Safety Board officials were notified Friday and are continuing to investigate the crash.