Cessna 340A plane crashes at Gunsite in Paulden, killing all 4 aboard 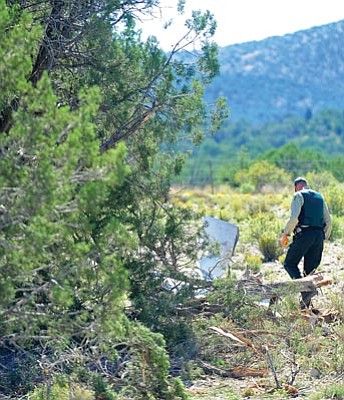 Matt Hinshaw/The Daily Courier<br /><br /><!-- 1upcrlf2 -->A US Forest Service law enforcement officer examines a sheared-off piece of debris from an airplane crash that killed four people at Gunsite in Paulden Friday afternoon. A six-passenger Cessna 340 struck a tower on the Gunsite facility, causing the plane to lose control and crash.

Four people reportedly died in a plane crash at about 12:30 p.m. today at the Gunsite firearms training academy in Paulden.

Sheriff's spokesman Dwight D'Evelyn said witnesses saw the plane clip some trees and then appear to explode on impact. Some witnesses also said the plane may have struck a radio tower on the Gunsite grounds.

"It is our best information that four persons were killed in the crash," he said.

The plane has been identified as a Cessna 340, six-passenger aircraft. The Federal Aviation Administration confirmed the plane departed from Bullhead City earlier today.

FAA and National Transportation Safety Board officials have been notified, D'Evelyn said.

Identities of those on board have not been confirmed and will be delayed until next of kin have been notified, he said.