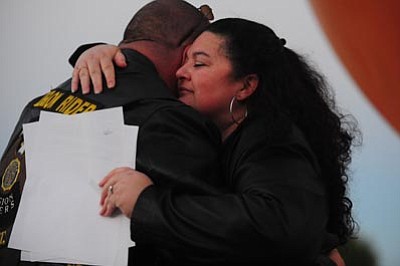 Les Stukenberg/The Daily Courier<br>Tina Roach and her fiancé share a hug after Roach spoke at the Take Back The Night event in Prescott Valley Wednesday. Roach is a domestic violence survivor and now has moved on to a healthy, loving relationship.

And while women outnumbered men at the ceremony, Yavapai County Attorney Sheila Polk stressed, "Domestic violence is not a woman's issue. It affects everyone."

Polk began her brief speech by saying researchers have determined risk facts that can lead to homicides involving women as victims, such as men making "degrading remarks" and abusing their partner while they are pregnant.

She urged her audience to be more sensitive to the plight of domestic violence victims by "believing in" and helping them.

Domestic violence is no longer a hushed-up crime in which women and children suffer in silence. The movement to make the public more aware of domestic violence began in the 1970s, said Kathryn Chapman, director of the Yavapai Family Advocacy Center in Prescott Valley.

"Back then, it was a private matter," Chapman said. "Right now there is a lot more awareness."

Both Chapman and Robin Burke, executive director of Stepping Stones Agencies in Prescott Valley, said domestic violence has worsened because of drug and alcohol abuse as well as mental illness.

"I see it at Stepping Stones (Agencies)," said Burke, who opened a shelter for domestic violence victims after founding the nonprofit entity in 1980. Stepping Stones started with a shelter with 10 beds and now has double the number of beds plus four apartment units for transitional housing.

Burke said she blames 95 percent of the problem of domestic violence on alcohol and drugs.

"That is what I see," she said. "About 10 percent (is from) serious mental illness. It makes it worse because of the duality of the issues. Not only do you have to uphold victim rights and perpetrator accountability, but if you really want to solve the problem, someone has to address the systematic issues around domestic violence."

Some issues include increasing stresses families have felt because of the economy, Chapman said.

Chapman said abuse comes from a variety of people.

Chapman, a 16-year veteran of the field who started at the center in January 2011, said children do not always show visible signs of abuse.

"We see some of the kids walking in with bruises," Chapman said. "But far more we see sexual abuse" of children. "I think emotional scars are going to be there for the rest of their lives."

The Prescott Valley and Prescott police departments reported a steady flow of domestic violence cases. Prescott Valley police responded to 765 calls for service during 2012, according to figures that Detective James Tobin provided.