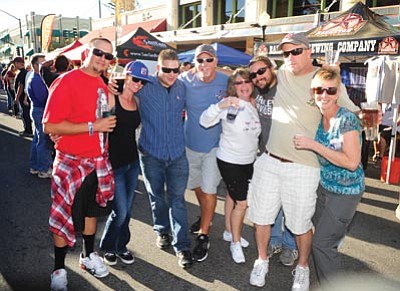 Les Stukenberg/The Daily Courier<br> A group of friends (who are not really in a witness protection program) are having a great time during the Oktoberfest celebration in downtown Prescott Saturday afternoon. The event benefited the Zeitz Sister Cities student exchange program.

What's better on a hot fall afternoon, when the mood strikes, than a beer?

Thirty brewers brought more than 75 varieties of beer to Prescott on Saturday for the annual Oktoberfest celebration in downtown Prescott. Folks who went to the event, and there were hundreds, got a chance to sample a wide selection of brews and donate to a good cause at the same time.

Event organizer Steve Gottlieb of Eagle Management LLC said he hoped the event would raise about $9,000 for the Zeitz sister City Student Exchange program, which intends to send a group of local kids to Germany for two weeks next year.

Mandy Mellencamp and Olivia McCarty, Prescott High School grads from a few years ago, were out and about and "enjoying the vibe" of downtown. Another group claimed to be in a witness protection program and, if so, those people know how to party. Local video cameraman and mountain biker Carlos Hurtado had his brother Freddie in town from California, and they and a couple of friends were using up their tickets sampling some of the many beers available.

Oktober came early to Prescott this year, and lots of people were glad it did. The annual event has become a staple in the annual event calendar, one that brewers, locals and visitors alike look forward to.