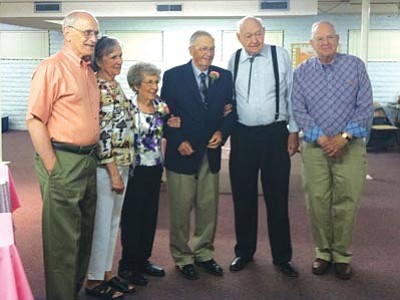 Walter and Lois Shafer recently celebrated their 60th anniversary with a dinner party at the Hillside Church of God in Prescott. Among those in attendance were all of the members of their wedding party; Best Man Bob Shafer (Walt's brother), Maid of Honor Carolyn Edwards (Lois' sister), and ushers Ed Bergman and Earl Slipher (close friends). The party was hosted by the families of their four children, Steve, Kevin, Kent and Margie, and was attended by their three grandchildren, their spouses, three great-grandchildren, and many other longtime friends and family members.

Walt and Lois met in Flagstaff in 1949, were married on Sept. 20, 1952, in Phoenix, and moved to Prescott in 1958 to join partners in a meat packing plant in Granite Dells. They eventually found their calling as teachers for the Prescott Unified School District, where Walt taught Physical Science for 22 years at Prescott Jr. High School and Prescott High School, while Lois taught Second Grade for 24 years at Washington Elementary School and Abia Judd Elementary School.