Chanukah and Thanksgiving in first convergence since 1888 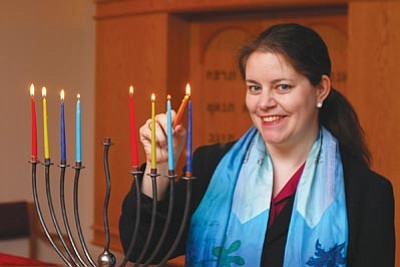 Jewish homes will have their Thanksgiving dinners illuminated by Chanukah candles for the first time since 1888 when both holidays come together in happy convergence. It won't happen again for another 57 years.

The lunisolar Hebrew calendar, used by Jews to determine the dates of religious observances and rituals, diverges from the Gregorian calendar so that Jewish holidays don't fall on the same dates on the secular calendar from year to year, notes Rabbi Jessica Rosenthal, spiritual leader of Temple B'rith Shalom in Prescott.

Chanukah, an eight-day observance that commemorates the successful revolt, circa 200 BCE, of the Maccabees and their allies against the oppression of the Assyrian-Greek tyrant Antiochus IV, usually falls close to Christmas. "But this year, Jews will have the double joy of celebrating Chanukah and Thanksgiving at the same time," Rosenthal said. "It's really an extraordinary occasion."

Jewish tradition holds that the Maccabees defeated the much larger occupying army and expelled them from the Holy Land. But when the victorious Maccabees entered the Holy Temple, they couldn't find any pure olive oil to kindle the menorah. Their search turned up a small jar containing only enough oil to burn for one day. Instead, it burned for eight days. The Jews considered it a great miracle, and Jewish families have lit candles for each of the eight days ever since.

"Chanukah has always been a special time for Jewish children," Rosenthal added. "Since Cha-nukah most often falls near Christmas, our kids had a chance to celebrate the holiday season through their own faith. This year we get an early start on Chanukah - and Jews are using their imaginations to bring it together with Thanksgiving." Those efforts include turkey-shaped menorahs, songs like "The Ballad of Thanksgivukkah," and imagined meals with the Maccabees breaking bread and sharing potato latkes with the pilgrims and Indians.

"It's all great fun, but it's also a reminder of the heritage of freedom from oppression and gratitude for God's bounty that all Americans share at this time of year," Rosenthal said. "The convergence of these two important holidays symbolizes how all of us in America can come together in joy and celebration."