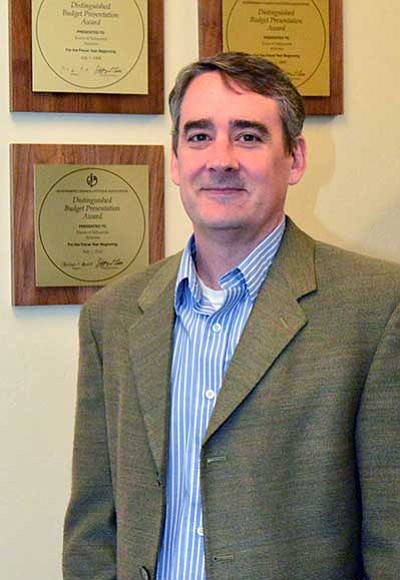 "Mr. Saxton has an awesome background as far as auditing," Supervisor Jack Smith said. "He's worked with the Auditor General twice, and plus, with the background that he's worked in government, it made him an ideal candidate for our position."

"He answered questions directly; he just did a great job during the interview," Smith added.

Saxton is expected to take the reins as the county's finance director Dec. 16, county administrator Phil Bourdon wrote in an email on Monday. Supervisors appointed him at an annual salary of $93,615.

Saxton is currently the Finance Manager for the Town of Sahuarita and has 15 years of experience in public sector accounting, Bourdon wrote.

"Yavapai County is up in the beautiful mountains with four seasons and trees. This is the place that I would love to live the rest of my life," Saxton said. "I've been an auditor for a number of years and a finance manager for several years and the next step in that process is to become a finance director. So finding a good match at what I can do and what someone is looking for is what led me to Yavapai County."

Saxton will take over for former Finance Director John Zander, who retired from his position on Nov. 1. Zander was appointed to the position in 2006.

The county received 13 applications for the position, Boudon said.

Supervisors scored and ranked each candidate individually, Smith said. At the end of the all the interviews, Saxton was at the top of the supervisors' list for the position.

In other business, supervisors:

•Approved, 5-0, agreements for construction and operation of photovoltaic solar systems at the Camp Verde Jail and the Verde Court Facility by SunEdison Origination LLC and purchase of the electric power generated by the systems.

•Approved, 5-0, a Professional Services Contract in the amount of $34,190.00 with Cardno, Inc. for design services for Prescott Country Club Area Drainage Improvements.