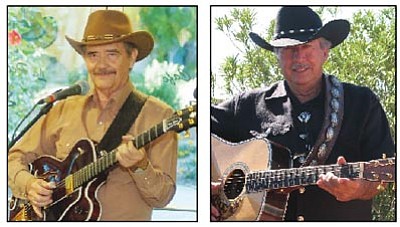 Like a lot of country music aficionados, performers Ray Scalf and Chuck Ozbirn got bit by the toe-tappin', boot-stompin genre of music when they were kids.

For Scalf, his mother was his inspiration. "She loved Chet Atkins," he said from his Sun City West, Ariz., home this past week. She started teaching her son chords on guitar and it was Atkins' tunes "she wanted me to play," he said. And his mother and her two sisters and the trio they formed got him hooked onto country, too, he said.

The three would give concerts in their front yard. "I enjoyed watching the crowd" that gathered as the trio sang and strummed guitars to entertain their audiences.

Scalf and Ozbirn will be in town Thursday, Nov. 14, for the Prescott Opry at the Elks Opera House. The show starts at 7 p.m. Tickets are $17, with senior, group and student discounts. To get tickets, go online to www.elksoperahouse.com or call the Elks Opera House box office at 777-1370.

Another performer headed to Prescott for the Opry concert, Chuck Ozbirn, "traded a baseball glove for my first guitar" when he was 12 years old and began playing and singing in church when he was 14.

Ozbirn, who grew up in the Ozarks, enjoys melodies that "tell a story about someone's life - how people lived and their heartaches.

"I grew up in the part of the country where people would get together, play their music and sit around and sing. I grew up with it. It was instilled in me. I never lost my feeling for that kind of music."

He will entertain the Opry audience with "Holding Things Together," "California Blues," "The Way I Am," and "Pass Me By."

Prescott resident Ellis Teller is another artist who likes music that "is going to move the audience.

"I give them something tangible," he said. "I think a song has to say something. I like all music." And the music that most appeals to him has "substance. I even like music with no lyrics."

And, though Teller didn't grow up in a musical family, something he heard in kindergarten stayed with him - Woody Guthrie's "This Land Is My Land." The impression that left on him set him on a path.

On Thursday, he plans to sing, accompanied by his guitar and harmonica, "traditional music that will lift people out of their seats."

His repertoire lends itself to "songs that have earned their value through time," songs "not like dust in the wind."

These songs "just don't blow away. They make people feel," he said.