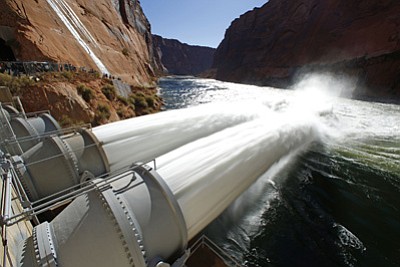 AP photo<br> This Nov. 19, 2012 photo shows a release of water into the Colorado River from bypass tubes at Glen Canyon Dam in Page, Ariz. An abundance of sand in the river is giving federal officials an opportunity to flood the waterway to spread the sediment throughout the Grand Canyon.

FLAGSTAFF - An abundance of sand in the Colorado River is giving federal officials an opportunity to flood the waterway to spread the sediment throughout the Grand Canyon, creating sandbars and beaches for campers as well as protection for archaeological sites.

The U.S. Bureau of Reclamation oversaw a similar high-flow experiment from Glen Canyon Dam last November. The difference in the one starting Monday is that three times as much sediment is available from monsoons to be pushed through the river. It's enough to spread across a football field 690 feet deep.

Most of the sediment once deposited throughout the Grand Canyon now is trapped behind the dam near the Arizona-Utah border. The intent of the flooding is to mimic pre-dam conditions.

"The idea is to see if we can react whenever conditions are right, whenever there's a lot of sediment load in the river," said Anne Castle, assistant secretary for water and science at the U.S. Department of the Interior. "Whether we can reverse or at least stabilize the net loss in sediment that has been occurring in the river below Glen Canyon Dam."

The bypass tubes at Glen Canyon Dam will be opened Monday around noon, sending water rushing through the Grand Canyon for five days. River rapids that normally would be challenging might be easier to navigate, and those that typically are straightforward might become more difficult.

Floating tours between Glen Canyon Dam and Lees Ferry will cease for five days, and opportunities for trout fishing will be limited.

The National Park Service has told river rafters and backcountry hikers to make sure their equipment is secured.

The flow won't be at full capacity because two of the power units at the dam are down. It won't alter the amount of water sent between Lake Powell and Lake Mead near the Arizona-Nevada border either. Monthly adjustments will be made to account for the flood, officials said.

Releases will return to normal Nov. 16.

The high-flow experiment will be the second since the U.S. Department of Interior declared them routine throughout 2020. The regularity of them will be based partly on the sediment deposits from Colorado River tributaries, mainly the Paria River.

The department has said it won't conduct any of the experiments in the springtime until at least 2015 because past experiments have shown that flooding the river at that time increases the population of trout that prey on native fish.

The U.S. Geological Survey will be measuring sandbars, fish communities and the food base to compare the results to those in 2012.