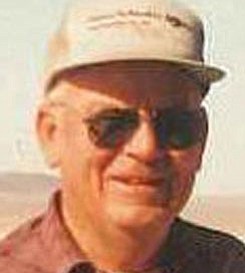 William "Bill" Arnett, 82, passed away Nov. 2, 2013. He was a loving and dedicated husband and a gentle and caring father, grandfather and great-grandfather. He was a true friend and a beloved brother and uncle, and was admired by all whom he encountered. He was a talented craftsman who could build or remodel anything.

Bill was born in 1931 in Fay, Okla., to Orval Arnett and Ester Owings. After his father died when he was 2 years old, his mother remarried John Coats, who became his dad. He and his family relocated to the Chino Valley, Ariz., area and he worked at the Mills Quarries and on various farms as a young man.

He graduated from Prescott High School in 1949 and in 1950 joined the United States Air Force, where he was a radio mechanic. While stationed in Kansas, he met Maxine Hudson. They were married in Prescott in 1955 and honeymooned in Yarnell.

After he left the Air Force, Bill went to work for Mountain Bell (aka AT&T), where he worked for 30 years. During retirement, he had so many requests to service the phone systems of various businesses in the tri-city area, he formed Arnett Telephone Service, which kept him busy for many years.

Bill and Maxine were committed to each other and devoted their lives to providing a healthy, happy and enriched world for their four children, Brenda, Bill, Julie and Ellen, and later their grandchildren and great-grandchildren. He lost his beloved Maxine in 2002.

He is survived by his four children, Brenda (Van) Parson, Bill (Deena) Arnett, Julie Bradshaw and Ellen (David) Blair; and many grandchildren and great-grandchildren, who knew him as Grandpa Bill or Bumble Bee Bill. He is also survived by his sisters Betty Humphreys, Bonnie (Bill) McGrew and Joyce (Robert) Culp, and many nieces and nephews who knew him as "Uncle Chuckie."

In addition to his wife, Bill was predeceased by his parents, his brothers Bobby Coats and Larry Coats, and sister Nina Fish.

Visitation and rosary will be from 6 to 8 p.m. Friday, Nov. 8, 2013, at Memory Chapel Mortuary, 131 Grove Ave., Prescott, Ariz. A Catholic funeral mass will be at 11 a.m. Saturday, Nov. 9, 2013, at Sacred Heart Church, 150 Fleury, Prescott. Burial with military honors to follow at Mountain View Cemetery. There will be a reception for friends and family at the Smoki Pueblo, 147 N. Arizona, Prescott, following the burial.

In pondering our time with him, these words come to mind: "Dance like nobody's watching (he is dancing with Mom today), love like you'll never be hurt (you never know what tomorrow will bring), sing like nobody's listening (even when disease takes your words), and live like it's heaven on earth (because one day you will see His face"). He did these things and took us along for the ride. He was the epitome of GRACE and KINDNESS and the twinkle in his eyes was PRICELESS! THANKS, DAD!

Bill's family wishes to thank People Who Care for assisting him in the early stages of his disability and Granite Mountain Home Care and Hospice for their guidance and compassion. There are no words that can express our thanks to the Aspen Creek Care Home in Prescott Valley and its caregivers for their love and attention, for making him feel at home and loved at times we could not be there and for allowing him to transition from this life peacefully and with dignity.