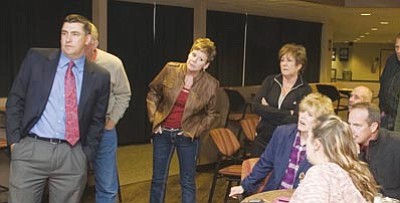 According to unofficial Yavapai County Election results, 53.7 percent of the votes were against a proposed PUSD $28 million bond - with 9,685 votes against the measure and 8,347 for it. Just over 46.3 percent voted in favor of the bond.

Nearly 58 percent of the votes turned down the $2.3 million PUSD override, with 9,567 voting against the measure and 7,001 voting in favor of it.

The trend continued with the HUSD. Nearly 66 percent of the area's registered voters said no to the district's proposed $2.8 million override - with 7,301 voting against the override request and 3,776 voting in favor.

PUSD Superintendent Dave Smucker said he appreciated the efforts of the district staff.

"It saddens me, for them, and we will continue to do our work. I want to recognize the efforts of the political action committee that was put together: Greg Mangarelli, Cheryl Fernandez, Tom Benson and a swarm of other people that care about this community and care about public education. They gave their hearts and souls throughout this period of time," Smucker said.

Despite losing the bond and override, he said district staff would continue to do the best they can for students in the community.

"I'm disappointed, but it was a fairly strong message this evening," Smucker said. "I hope, in the future, both sides will be able to put their differences aside and think about the kids in the community and their needs for the future. We've got a good public education system here."

Mengarelli said the group would re-evaluate and decide how to continue in the future.

"We're a little disappointed. We thought we did everything we needed to do. At this point we'd like to thank our donors and the volunteers and community members that helped with the campaign," Mengarelli said.

Following the results of the election, HUSD Superintendent Paul Stanton said the district would continue to provide the best education for the children in the area.

"We'd like to thank all the voters for voting," Stanton said. "We've got to wait to see where we are with student enrollment and where we are in the Legislature to see if there are any changes. But we will continue to provide the best education for our children."

CVUSD Superintendent Duane Howard offered his thanks to the volunteers for their efforts in supporting the bond.

"We're disappointed. I'm going to get up and go to work tomorrow and do the best we can. Everybody that's works for me is going to do the best they can. We have to accept that this is the level of support this community will give to us," Howard said.

School officials requested the $2.3 million override to maintain various school programs at risk of being cut, to attract and keep qualified teaching staff, to start safety and mental health programs in the district, to enhance existing programs, and to make up for funding no longer provided at the state level.

HUSD sought its $2.8 million override to increase school safety by adding resource officers and counselors, as well as restore full-day kindergarten classes, music and physical education, and early childhood programs. They also hoped override funds could be used for class size reduction and to attract and retain quality teaching staff.

At the same time, voters in the Verde Valley overwhelmingly approved school ballot measures in Cottonwood, Sedona and the Mingus High School District.