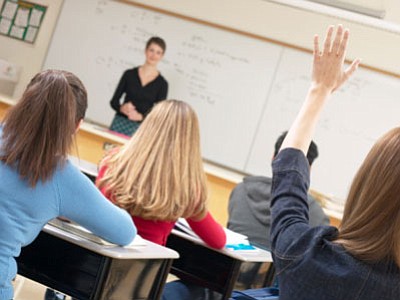 On the surface, district schools and charter schools may seem worlds apart, but they are more alike than some might think.

Both, for example, are funded by federal and state tax dollars, explained Tim Carter, Yavapai County school superintendent. Both types are public schools.

District schools, however, get additional funding from local tax dollars via secondary property taxes, while charters use private dollars generated by the school's sponsoring body.

"You have primary and secondary tax rates. Every property, basically, except in rare situations, should have a primary tax assessment," Carter said.

Secondary tax rates come into play when there are voter-approved bonds and overrides, he said.

"We are not a regulatory agency. We're a fiscal agent. We do all of their elections. There are 162 things in statute that county school superintendents, or the ESA, has to do. Most of those are financial, but a lot of them are instructional as well," Carter said. "We have zero jurisdiction of any kind over charter schools."

When it comes to sports and extra-curricular activities, Carter cited "significant differences."

Charter schools, he said, stay closer to the edicts set forth in their charters.

"Their focus is different. If their charter says they're going to be an equestrian-based program, then basically everything they do should be focused around some equestrian aspect. Some charters do have athletic programs," Carter said.

Charter schools are typically created by community organizations, parents and teachers, and for-profit organizations. It is rare for a charter school to be affiliated with a school district, Carter said.

Like district schools, charter schools also use boards, which are selected based on the school's charter document, and normally serve in an advisory capacity.

District school governing boards are based on state statutes and required to perform certain functions, such as submitting an annual budget.

Charter schools, he added, have to follow their charter first. The role of a charter board, he said, can vary.

"There has to be a governance structure named and approved in the charter," Carter said. "None of them are elected boards like districts have. In some cases, the director can almost serve as a one-person board. In some cases, it's the executive officers of whoever holds the charter, which might be four or five people."

Some charter boards, he added, can also make all the decisions for the charter school.

Neither district schools or charter schools charge admission for attendance, though fees can be charged for certain programs within the schools.

Both charter schools and district schools must adhere to federal laws and state education requirements.

States mandate certain curriculum, such as American history, and other classes; as well as other standards including credit totals.

Like district schools, charters utilize administrative staff and principals. Many times, charters refer to their school leader as a director.

Charter schools can often emphasize a particular focus in its curriculum, such as technology and science, while district schools work from a comprehensive curriculum, rather than a particular emphasis.

Students can apply to charter schools rather than be assigned to a school based on where they live like district schools, though areas with open enrollment are also available. The quad-city area, for examples, works on an open enrollment system.

Both district and charter schools administer AIMS tests. Success rates, however, vary between individual schools. AIMS testing will be phased out at the beginning of the next school year.

Since district schools are more comprehensive, their rate of success is controlled by several factors, including their instructional strategy and their student population. The academic focus of a charter and the students who enroll, however, are major factors in determining their success.

"When we first started charters in Arizona, a lot of them were for profit. They could put the money in their pocket. You operated it like a business. Today those are very, very rare. We only have a handful of them left in the state," Carter said. "Today, if you were applying for a charter, it would not be a for profit. It would be a nonprofit entity."

For information on local charter and district schools, visit the county education website at www.ycesa.com.