Column: You can help lower the baby bird mortality rate 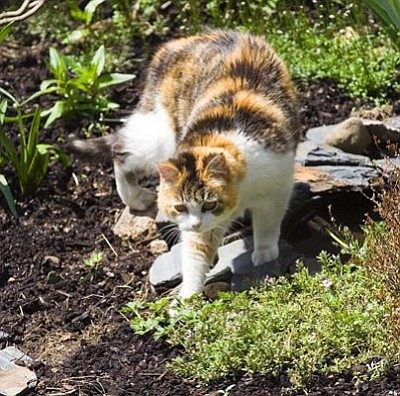 Photos.com<br>Keeping cats indoors will prolong birds’ lives (not to mention the cats’). And make sure the water in your birdbath is shallow so baby birds don’t drown.

Recently I wrote about the ravens that are nesting in a ponderosa pine tree in our yard. What I didn't mention was the pair of Cooper's hawks nesting in a tree in our neighbor's yard! It is unusual to have birds of prey and ravens nesting so close to one another.

This past week, I witnessed an amazing interaction between one of the ravens and one of the hawks - a mid-air dog fight - in which each of them were taking turns swooping down on the other. I wouldn't declare either of them to be the winner, but it certainly appeared they each had a turn or two getting their licks in.

The raven fledglings are getting bigger. Even though I haven't seen them yet (the nest is in the crown of the tree) I can tell by their vocalizations that they are stronger and more robust. I suspect it will be another week or two before they start venturing out of the nest onto the limbs of the tree.

Just today, a customer shared with me an amazing story that took place at an active raven's nest near the 14th hole at the Prescott Lakes golf course off of Smoketree Lane. A red-tailed hawk raided the raven's nest and took one of the baby ravens right out of the nest. The raven parents attacked the hawk as it flew away with the baby, but to no avail. The red-tailed hawk landed in a tree and proceeded to eat the baby raven.

There are many factors influencing bird mortality - some natural and some unnatural. Natural causes of mortality include predatory bird species such as roadrunners, scrub jays, ravens, hawks and owls. Other natural predators include snakes, skunks, raccoons, foxes, bobcats and coyote, to name a few.

Then there are all of the non-natural causes of death, ranging from herbicides, pesticides, window strikes, automobiles and house cats.

On Monday evening, just after sundown, I was walking in my neighborhood when I saw a Gambel's quail fleeing its roosting location where it had already settled in for the night. At first I thought it was kind of odd that the quail would just pop out of a tree, but then just a few seconds later a large white cat jumped out of the tree! That quickly explained why the quail was agitated.

Cats that are allowed to roam outside are the biggest threat to wild birds - especially to baby quail. While baby quail are mobile and are capable of running within hours of hatching, they are not capable of flight. Flightless birds are no match for a domestic cat.

What can you do to help improve the number of quail that make it to adulthood? First and foremost, keep your cats inside! Secondly, if you have a birdbath or water feature that is accessible to the babies, make sure the water is very shallow. Water more than an inch deep is a potential death trap for baby quail.

Eric M. Moore is the owner of Jay's Bird Barn, with two locations to serve northern Arizona - 1046 Willow Creek Road in Prescott, and 2360 State Highway 89A in Sedona. Eric has been an avid birder for more than 45 years. If you have questions about wild birds that you would like discussed in future articles, email eric@jaysbirdbarn.com.