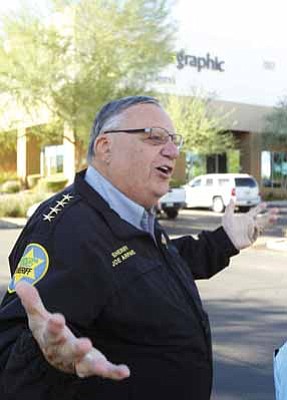 AP photo<br> In November 2011, Maricopa County Sheriff Joe Arpaio spoke to the media after his deputies conducted a raid at a printing company in Phoenix, arresting six suspects out of 17 they were allegedly looking for.

PHOENIX - The immigration debate in Arizona reached a boiling point in 2007 when the state passed a groundbreaking law targeting those often blamed with fueling the nation's border woes: Employers who hire immigrants living in the U.S. illegally.

The law marked a bold step by a state into an area that had long been the domain of the federal government, and it paved the way for Arizona's landmark 2010 immigration law. It also represented a key moment in the immigration battles that continue today as Congress mulls a proposed overhaul of the immigration system.

But an examination of the law by The Associated Press found that it has done little to crack down on problematic employers. Only three of the state's 147,000 employers have been brought to civil court on illegal hiring allegations, while several hundred employees who are living in the U.S. illegally have been arrested under a section of the law that made it a felony to use fake or stolen IDs to get jobs.

While the law has been upheld by the U.S. Supreme Court and hailed as a tool for states to confront illegal immigration, it has faced several problems:

- Hundreds of immigrant workers arrested under the law have spent months in jail on ID theft charges, while only two businesses - a sandwich shop and a now-defunct amusement park - had their business licenses suspended for several days. The case against the third business, a custom furniture maker, is still pending.

- A high legal standard for proving violations by businesses and a lack of subpoena power in getting employment records are almost insurmountable barriers to making cases against employers.

- Maricopa County Sheriff Joe Arpaio's office is the only police agency in the state that has raided businesses in enforcement of the employment law. It has arrested hundreds of workers in 72 business raids since 2008. The office has since been accused by the U.S. Justice Department of discriminating against Latino workers, allegations the sheriff denies.

- Despite the small number of cases against employers, the county prosecutor's office in metropolitan Phoenix has spent $4.5 million since 2008 investigating businesses suspected of hiring workers who aren't in the country legally and to pursue criminal ID theft cases against employees. Nearly a third of the money - $1.4 million - was given by the prosecutor's office to Arpaio's agency to investigate such cases.

Backers contend the enforcement numbers tell only a piece of the story. They say the law has helped combat identity theft and prompted immigrants living in the country illegally to leave Arizona. They also believe that the fear of business raids has caused employers to follow the rules.

"We are never going to get 100 percent compliance, but we have made a difference," said former Arizona Senate President Russell Pearce, the driving force behind the employment law and the state's 2010 immigration law that requires police officers, while enforcing other laws, to question people's immigration status if they are suspected of being in the country illegally.

The number of immigrants living in Arizona without permission to be in the U.S. declined by 200,000 from 2008 to January 2011, when the total estimated number stood at 360,000, according to a U.S. Department of Homeland Security report. While the law's backers say the decrease shows the state's immigration laws are working, other factors contributed to immigrants leaving the state, such a construction industry that hemorrhaged jobs during that period.

Democratic state Sen. Steve Gallardo of Phoenix, an opponent of the law, said the imbalance in the number of cases against employers versus workers is a reflection of legislators who wanted to appear tough on illegal immigration but gave employers plenty of wiggle room.

More than 500 immigrants who weren't authorized to be in the country have been arrested on charges of using forged documents or stolen identities to get jobs at businesses raided by Arpaio's office since 2008. An unknown number of additional ID theft arrests were made by other police agencies, which don't raid businesses in enforcing the law but make cases when people complain that their identity has been stolen.

Lawyers for immigrants accused of ID theft say their clients used fake or stolen identities to get jobs, not to rack up debt under another person's name. Their clients spend months in jail without the chance of getting a bond set, because a voter-approved law denies bail to people who aren't in the country legally and are charged with serious felonies, such as murder, sexual assault and aggravated identity theft.

Immigrants desperate to earn money to support their families often plead guilty to felony charges to get out of jail, walking away with time-served but often facing deportation and unable to ever again enter the U.S. legally, their lawyers said.

The law's backers say illegal immigrants who steal identities to get jobs are still committing a crime. Maricopa County Attorney Bill Montgomery, the top prosecutor for the state's most populous county, said identity theft victims may get a letter saying they owe back taxes for jobs they've never held, could have problems getting loans and face hassle in untangling the mess.

While most of the ID theft cases end in guilty pleas, one case that went to trial last year ended with an acquittal, even though the man from Costa Rica told jurors he used someone else's Social Security number to get a job.

Walter Flores-Garcia, a 47-year-old concrete company worker, told jurors that he didn't return to Costa Rica after he overstayed his visa because his daughter wouldn't get the same type of treatment for her cerebral palsy back home. He also told jurors he used someone else's information on work documents to get a job and had no intention to defraud the true Social Security number holder.

Jury forewoman Marilee Avina said jurors concluded Flores-Garcia wasn't leeching off others and took all possible steps to be legitimate. "One juror said, 'This could have been me,'" Avina said.

The chief difficulty in making cases against employers is that it's not enough to prove a business hired an illegal immigrant. To prove a case, prosecutors say they need a confession from an owner or hiring manager, or a recording of an owner admitting to breaking the law - all of which are difficult to come by.

Another barrier is the law doesn't give prosecutors civil subpoena power to make suspected violators hand over records while the case is being investigated.

Business owners say the law puts them in a tight spot. They note they aren't document experts, and insist they would open themselves up to civil rights lawsuits if they were to inquire too deeply into whether a prospective employee is in the country legally.

"It's not the employer's job to be the Border Patrol," said Marion "Mac" Magruder, an opponent of the law who runs a human resource business and grew so frustrated with Arpaio raids that he resigned as a volunteer in one of the sheriff's posses.

The sheriff stands by his raids and fake ID arrests, saying there's no rationalization for stealing a person's identity and that his officers aren't raiding businesses with the goal of seeing if workers are here illegally.

"I am going in there to lock these people up. They just happen to be here illegally. That doesn't change that they are violating the law with fake IDs," Arpaio said.

The sheriff said he's bothered that so few employers have been brought to court and called the law's penalties for employers weak. "I would love to catch the employers," Arpaio said.