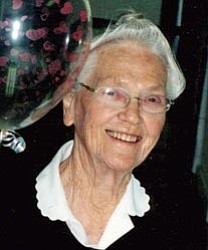 Geraldine (Gerry) Wieweck passed away at Las Fuentes Assisted Living in Prescott on May 6, 2013 at the age of 92. She was born in Chelan, Wash. in 1920 to Alva and Flo Culver.

She moved to Seattle, Wash. prior to WW II, working at Boeing Aircraft where she met, and later married her husband Arnold in 1943. After the war, they moved to Butte, Mont. and then to Prescott in 1947, where she lived in the same home for 61 years until she moved to the senior apartment complex where she lived until her death. She was able to be a homemaker for her husband and children and enjoyed working in their yard, turning it into a virtual park.

She is survived by two sons, Leland (Marjorie) of Cottonwood, Ariz. and Perry (Susan) of Prescott; four grandchildren, Todd of Salem, Ore., Bryan of Prescott, Laurie of Santa Barbara, Calif. and Cheryl of Gilbert, Ariz.; and seven great grandchildren; and a sister Lucile of Salem, Va. She was preceded in death by her husband Arnold, her parents and a younger sister and brother.

Services will be at 10 a.m. Tuesday, May 28, 2013 at Heritage Memory Chapel, 131 Grove Ave., Prescott. The family wishes to thank the staff of Las Fuentes, and Hospice Family Care for the wonderful care they provided, and requests that any memorials be sent to Hospice Family Care, Inc., 100 E. Sheldon St., Suite 100, Prescott, AZ 86301 or the Alzheimer's Association, 3111 Clearwater Drive, Prescott, AZ 86305.