Comic book artists show off superpowers of their own 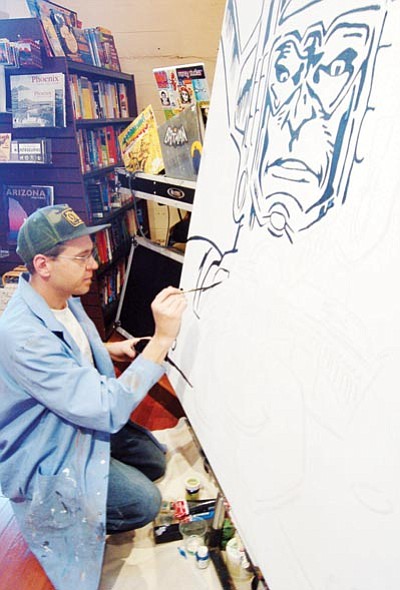 Some called it a geek's paradise, while others deemed it a marketing dream.

No matter how you look at it, superheroes prevailed over the Cinco de Mayo weekend thanks to Free Comic Book Day on May 4 and the release of "Iron Man 3" in movie theaters across the country.

At Game On in Prescott Valley, a line of comic book fans formed to see artist Dave Beaty, who visited the local business as part of the national Free Comic Book Day event. Across the plaza, a separate line formed at the Prescott Valley Harkins Theater to see "Iron Man 3" starring Robert Downey Jr. as the metal-clad Avenger.

Beaty sketched a superhero for anyone who donated two non-perishable food items to the local food bank during the event. Many waited up to two hours for their sketch.

"Now it's becoming a lot easier to do. You have faster computers now and the software is great," Farmer said. "Comic books have come a long way. A lot of people who haven't picked up a comic since they were 10 or 12 will look at them now and just be blown away."

Ryan Liebe, an animation instructor at Yavapai College and a freelance artist, offered drawing demonstrations at Prescott's Peregrine Book Company on Saturday as part of the national comic book event.

"I was asked to come do some drawings and it sounded too fun to turn down," Liebe said.

DJ Alan Huddleston, who works as a fine artist and graphic designer, was also on hand at the Prescott bookstore Saturday. While there, Huddleston created a large acrylic painting of Galactus, a Marvel Comics character. He also spun superhero-themed tunes throughout the day from his DJ console at the back of the store.

"All the music is comic book-related and inspired," Huddleston said. "I used to work at a comic book store when I was younger. I still read and collect comic books."

Fans of comic books, in his opinion, form the "bread and butter" of American society.

"Everything that we think is cool now will be mainstream cool in five to seven years. Everything we liked five or seven years ago is what the mainstream likes right now," Huddleston explained. "Comic books are constantly at the cutting edge. This medium alone, I think, is the finest medium that we don't advantage of. Other parts of the world use sequential art, like comic books, to educate their young and working class. Comic books don't get the respect they deserve. There should be illustrated art with every manual you get for every job, just to make things easier and quicker and faster. It doesn't have to be superheroes or drama - it can just be life."