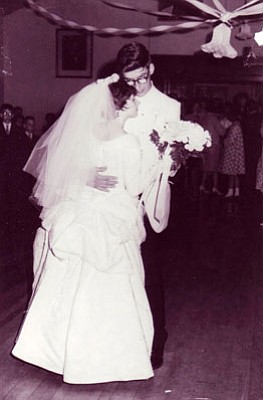 It was love at first sight for Patricia Roberta Wright and James Richard Switalski, who met at Nite Owl Drive-In in Milwaukee. After a brief courtship, they were married on April 27, 1963, at St. Paul's Church in Milwaukee, Wis. They settled down in Oak Creek, Wis. in 1974 and retired to Chino Valley, Ariz. in 2004. Still passionate for their hobbies and active friends, both enjoy giving back to the Prescott and Chino Valley community. Mr. and Mrs. Switalski have two wonderful adult married children, Gail Provenzano and her husband Mark of Gilroy, Calif. and Allan Switalski and his wife Linda of Avondale, Ariz. They have four beautiful grandchildren, Stephanie, Sasha, Jennifer and Mikey who love their adventurous grandparents very much.