Driver ejected, flown to hospital after crash on Highway 89 in Chino Valley 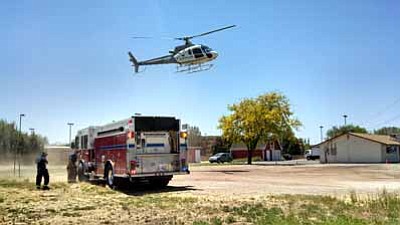 A Prescott man was flown to Flagstaff Regional Medical Center Wednesday after being ejected from his vehicle when it was hit by a truck.

At 12:18 p.m., Chino Valley Police officers and Yavapai County Sheriff's Office deputies responded to a two-vehicle collision in the 900 block of North Highway 89. A police report indicates both vehicles were traveling south on Highway 89 in the right lane when an International Scout off-road vehicle driven by a 79-year-old Prescott man slowed and began to turn into a business when it was rear-ended by a Dodge pickup truck driven by a 65-year-old man from Paulden.

"The collision caused (the Scout) to spin, at which time the driver door opened and (the driver), who was not wearing a seat belt, was ejected from the vehicle," said Chino Valley Police Sgt.Vincent Schaan.

Chino Valley Fire Department and Life Line Ambulance personnel treated the victim at the scene for trauma to his head before Native Air flew him to Flagstaff Medical Center for further treatment. He is listed in serious condition.

Neither the driver nor the passengers in the pickup were injured.

Highway 89 was temporarily closed to southbound traffic during the accident investigation, Schaan said.

The driver of the pickup truck was cited for failing to control his speed to avoid an accident.