1 dead after crash on Fain Road 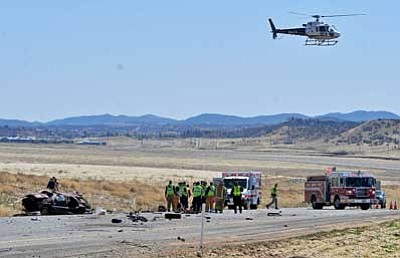 Matt Hinshaw/The Daily Courier<br> A Native Air helicopter lands at the scene of a two-vehicle collision on Fain Road near its intersection with Lakeshore Drive Saturday afternoon in Prescott Valley.

PRESCOTT VALLEY - A 19-year-old man was pronounced dead at the scene after a two-car crash on Fain Road just south of Lakeshore Drive on Saturday.

According to Arizona Department of Public Safety, the crash occurred near milepost 328 just after 12:30 p.m. Two vehicles were involved in the crash - one rolled at least once, according to responders with the Central Yavapai Fire District.

Two other people, a 20-year-old man and 21-year-old man, were transported from the scene in critical condition to John C. Lincoln hospital in Phoenix. Five passengers were reported to be involved.

"Both of them were flown by helicopters to Phoenix-area hospitals with critical injuries. Two others were uninjured. They refused medical treatment," Central Yavapai Fire District Battalion Chief Brad Davis said.

The name of the deceased has not been released pending notification of next of kin.

Davis said he couldn't speculate as to the cause of the crash at press time.

The crash caused the closure of Fain Road for several hours after the incident. DPS is investigating the incident to determine the cause of the fatal crash.