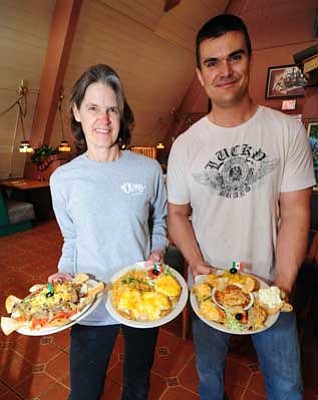 Les Stukenberg/The Daily Courier<br> Eileen Olivas and her son, Tom, who is a part owner along with his wife, Cassi, hold three of their signature dishes.

PRESCOTT VALLEY - Eileen and the late Ernest Olivas met more than 30 years ago while working at the original Garcia's restaurant in Phoenix while it was family owned, Eileen recalled.

"He learned to cook there, and then he became kitchen manager," said Eileen, who was the floor manager.

The Olivases opened two restaurants on their own in Phoenix in 1983.

Five years later, they decided to move to Prescott Valley because they did not want to raise their four boys in Phoenix, she said.

She and Ernest opened Olivas' Mexican Restaurant in 1988 in an A-frame building that initially housed Prescott Valley's original community center.

The building later housed a restaurant, and town officials had condemned the building, Olivas said. She added her husband and a contractor brought the building up to code before opening their restaurant.

"My husband was an excellent handyman," she said. "He did a lot of the work here himself."

Olivas' is the oldest Mexican restaurant in Prescott Valley, and Olivas noted it has survived the arrival of newcomers with three factors: family, good food and loyal customers.

Ernest died this past November, and his widow now runs it with her son and daughter-in-law, Thomas and Cassi.

"We have seen all the economic upturns and downturns," Olivas said. "We struggled for several years."

Olivas said the housing slump hurt business from construction workers, but "now they are starting to come back." Olivas' also draws patrons who work at Yavapai Regional Medical Center and doctors' offices.

The Sonoran style refers in part to the use of dried chili pods - often seen dangling from walls in Mexican restaurants - for making sauces for enchiladas, Olivas said.

Olivas' serves both hot and mild sauces, she said.

"We make our own tamales," Olivas said. "We make our chips everyday. Everything is fresh."

Olivas said the restaurant cooks to order, and patrons may order off the menu.

Olivas also takes pride in the drinks that are served from the full bar.

"We have the coldest draft beers in town," she said. "Our specialties are margaritas, and we have eight different beers on tap."

The menu for seniors and children contains nine items, including mini tacos and enchiladas, and chicken strips. Price ranges are $5.95 to $6.50, with an additional 50 cents when seniors are ordering.

Lunch specials range in price from $5.75 for a green corn tamale with melted chili and cheese to $11.75 for lunch for two, which features two apiece of mini tacos, tostadas and pollos, along with a dish of rice and a cheese crisp to share.

Olivas' serves a variety of specialties ranging from $8.50 for a Sonora enchilada to $12.95 for fajitas.

Dinner combos range in price from $8.50 for four beef or chicken taquitos to $13.75 for a beef enchilada, taco, tostada and rice.

Olivas' also serves hamburgers and sandwiches and huevos dishes, which include chili rellenos and chimichangas.

"What we are really known for is the pollo fundido," Olivas said. "It's like a fondue. It is chicken wrapped in a flour tortilla with jalapeno cream cheese and cheddar mounted on top."