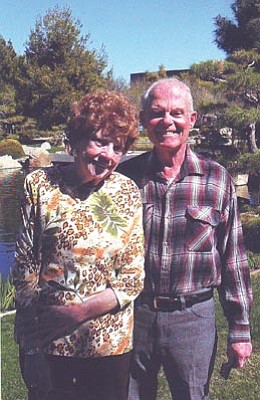 Douglas and Sandra (Peck) Oldfield recently celebrated their 55th wedding anniversary. They were married March 1, 1958, in Alexandria, Va. Doug was serving in the Army at nearby Ft. Belvoir and Sandra was working at the national Institutes of Health as an RN after graduating from the University of Virginia in Charlottesville, Va. Doug had graduated from Humboldt State University in Northern California and was teaching when called by Uncle Sam. Doug returned to teaching in Santa Ana, Calif., and Sandra continued her nursing while raising a family. Sandra worked as a RN for 30 years as well as doing some teaching. Doug retired in 1991 after teaching for 35 years. In 1992, they retired to Prescott.

The Oldfields have three sons, Steven of Prescott, David of Orange, Calif., and Scott of Mission Viejo, Calif. They also have five grandchildren, Ashley, Breanna, Susan, Christopher and Cameron.