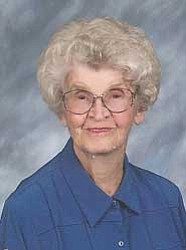 On March 9, 2013, Mavis L. Reynolds, 94, woke up in heaven where she met her Savior face to face and all of her loved ones who have gone on before her.

Mavis was born in Mesa, Ariz., Feb. 25, 1919. She attended first grade through high school there. After graduation, she attended Gregg Shorthand School. Soon after completing her courses, she joined the U.S. Navy Waves, where she was a secretary during World War II. After receiving an honorable discharge, she worked for the Forest Service. There she met her beloved husband Reginald Reynolds. They lived at various U.S. Forest Ranger stations in Arizona before retirement. Mavis was a member of the Southern Baptist Church.