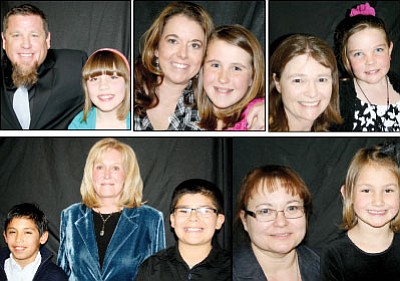 The 14th annual salute by the Rotary Club of Prescott Valley to top teachers in each of the Humboldt Unified School District school sites elicited special words and special feelings from nominating students, their number one teachers, and the principals on Feb. 26.

The Rotary Club recognizes the district's teachers each year with a banquet and gifts. This year, its sponsor, Decision Point Center, contributed $100 gift cards for each of 10 teachers (each school and the special education department). New this year were the $25 gift cards donated to each of the nominating students.

HUSD Supt. Paul Stanton said when one looks up quotations for education, they often fall under "parenting." He revised a quote by his mother, an educator herself, who said that teachers "give their heart, mind and soul to their students." Teachers are the keepers of their students' hearts, minds and souls, Stanton said.

"Our children are our destiny, our future," he added.

Coyote Springs Elementary School Principal Candice Blakely-Stump introduced sixth-grade teacher Brent Welsh as someone who connects with each of his 90-plus students.

"He knows their strengths and weaknesses and knows what motivates them and what to do to make them smile when they are having a rough day," she said.

Nominating student Darlene Duncan called Welsh "superb," and said, "I've had plenty of amazing teachers, but Mr. Welsh is the teacher who has actually helped me to start my life."

Principal Bucky Bates at Granville Elementary called Erica Sandum an innovative second-grade teacher, and "a friend to her colleagues, a support to myself, and an advocate for her children."

Taylor Shivers, now in sixth grade, nominated her former teacher, saying, "She is the reason that I started showing up at school with a smile on my face ready to learn."

"She possesses that 'special' something that engages a student and challenges them to reach their potential and beyond," Young said. "Mrs. Schreffler has been described by her peers as having the ability to teach a rock to read."

"I have learned to believe in myself and never give up. My favorite thing about her class is her really cool art projects," Alexis said.

LTS Principal Michael DeRois said he walked into Corradi's classroom one day and found her students on their backs under their desks.

"I asked one little girl what they were doing, and she, 'We're painting like Mikalo, he painted on the roof of the 17th chapel,'" DeRois said with a laugh.

"We had a lot of fun learning because you were the one making it fun for us," they said.

Principal Tusanne Cordes, who worked as teaching partner with Coleman for seven of Coleman's 15 years with the district, said, "Sometimes it is hard to develop strong relationships with students when you only see them a half hour a day, but Mrs. Coleman has found special ways to touch students' hearts and help them succeed in reading."

For more than 20 years, JoAnne Bindell, principal at Mountain View Elementary, and teacher Sue Folger have worked together or maintained a friendship. Bindell said when they were team teachers, "I learned a great deal from Sue, and I watched as Sue moved from good to great."

Nominating student Hannah Lonon, fifth-grader, said she and fellow students would miss Folger when she retires at the end of this year.

"When kids don't pay attention, Mrs. Folger is gentle and patient, but firm with her warnings to get them back on track. Mrs. Folger has an honest, joyful spirit, always wearing a smile," Hannah said.

Fourth-grader Dayna Hughes at Coyote Springs nominated Carol McFadden, special education teacher, as a Teacher of the Year because "she makes me feel special and I know she does other kids, too."

"First, she loves kids! She figures out a way to help every kid in Resource. Second, she is kind to everyone she meets. Third, she makes learning fun in different ways," Dayna said.

"She is dedicated to making sure her students are getting their needs met both academically and emotionally," Rowe said.

At the middle schools, students nominated an art teacher and a science teacher. Calling middle school years "the whitewater of the river of life," Bradshaw Mountain Middle Principal Brian Buchholtz described science teacher Cathy Alger as having energy, enthusiasm and respect. He said Alger's love of science takes her into the national parks every summer as a volunteer where she learns more about her subject and brings that knowledge back to the classroom.

Seventh-grader Catherine West nominated art teacher Julie Rodiguez at Glassford Hill Middle School, and said, "It would be crazy to overlook this amazing teacher. ...She loves what she does and she never stops working."

Principal Terry Matteson praised Rodriguez as a team player, adding "She doesn't know the meaning of the word no, and she loves children. Our students adore her and our staff appreciates her more than words can say."

Bradshaw Mountain High School Principal Kort Miner described band director Chris Tenney as having passion, knowledge and organizational skills. Nominating student Alyssa Turner, a junior, said Tenney treats each student as individuals, and he has inspired her to go outside her comfort zone to learn all aspects of music.

"Teaching is not just a job for Mr. Tenney, it is his passion. Inspiring his students to become better musicians, maintaining a smile day after day, and being a positive influence to anyone that crosses his path is everything that Mr. Tenney's style of teaching is about," Alyssa said.

The Liberty Traditional Chamber Singers, under the direction of Darrell Rowader, entertained the Rotarians, teachers, parents and students.

The Elks Lodge of Prescott Valley hosted the dinner.