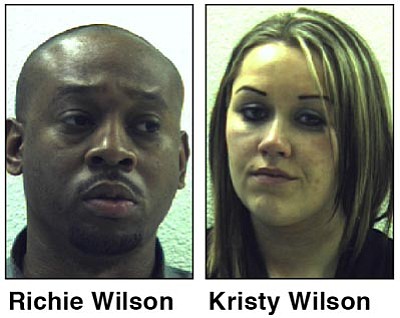 A traffic stop on I-17 led to a K-9's discovery of cocaine hidden in a vehicle and the arrest of a man and a woman on drug charges.

Richie Wilson, 38, and his wife, Kristy Wilson, 31, both of Cottonwood, were arrested 7:15 p.m. Friday after a Yavapai County Sheriff's deputy stopped their Nissan Murano just north of the Highway 169 junction because they were driving without headlights on and were following the car ahead too closely, Dwight D'Evelyn, Sheriff's spokesman, said.

The deputy developed a suspicion that the couple was hiding drugs in the vehicle, but they wouldn't allow the deputy to search it, D'Evelyn said, so he sent his K-9 partner to check the exterior.

The dog alerted on a door seam and, based on that alert, the deputies searched the interior of the SUV and, in the glove compartment, found three clear plastic bags containing cocaine. The total weight of the powder was about 76 grams, which D'Evelyn said was worth in excess of $2,500.