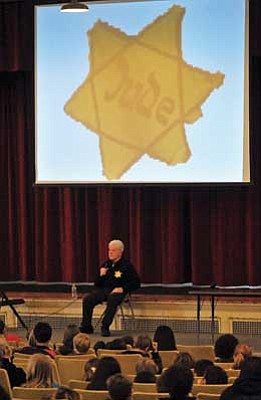 Matt Hinshaw/The Daily Courier<br> Auschwitz survivor and Hungarian native Stephen Nasser talks with Prescott Mile High Middle School students about the Holocaust, Thursday afternoon in Prescott. Nasser lost most of his family at the hands of Nazis when he was just 13.

When a Prescott Mile High Middle School student asked Stephen Nasser, 82, a Holocaust survivor, how long he was in a concentration camp, Nasser said just over a year.

In 1944, Nasser was 13 when he and 21 family members were taken from their home in Hungary and sent in boxcars to Auschwitz-Birkenau. Only Nasser survived.

"How would you react if you find some people with automatic weapons in front of your home, terrorists, they put the gun at you and say 'This is not your home anymore, get out,'" Nasser said. "You open you're mouth, bang, you are dead."

Bullies like that make the lives of innocent people miserable, Nasser said.

"You know about bullies," Nasser said. "Here in the United States, we have many, many youngsters who committed suicide because of being bullied. That is murder."

"If you ask me what would I give to be able to hug my mother, my brother, my father. I would give half my life," Nasser said. "I can't, because they were murdered by these bullies."

When they arrived at Auschwitz, Nasser saw a Nazi crush his aunt's skull with the butt of his gun as she ran after a Nazi who ripped her crying son from her arms. Moments later, the other Nazi threw slammed the 2-year-old's head into a boxcar wheel, killing him, Nasser said.

Nasser and his brother Andris, 16, were sick, then couldn't find their mother who had been beside them.

Years later, Nasser said he received a letter from a woman who said, "Your mother was one of my best friends. We were together in Bergen-Belsen. She died there three weeks after liberation from typhus fever."

Nasser encouraged students to put aside arguments with family, go home, hug them and say they love them.

Nasser and his brother were sent to Muhldorf work camp in Bavaria, where 6,000 died in one year.

"At home, I looked up to my brother. He was the brain. He was everything," Nasser said. "When I was in camp, the roles switched around. I was the one who tried to sneak food from the German kitchen. I got clobbered many times. I don't have any place on my body that was not beaten."

Nasser made a notebook from concrete bags and wire that he filled with his worst drawings and behind them he secretly wrote a diary.

"Physically the Nazis controlled me, there was no question, but they never penetrated my mind one iota," Nasser said.

When a girl asked what they ate, Nasser said black coffee in the morning, a ladle of "stew made from potato peels and all junk that human beings would not consume" at lunch, and at dinner, "slice of bread with a slice of margarine, a piece of German hard honey, and a slice of horse baloney."

Nasser's brother became so weak that he died in Nasser's arms weeks before liberation, but he made Nasser promise he would tell their story. He kept the promise in his book, "My Brother's Voice," and by talking to more than 100,000 people in 793 lectures.