PAVING THE WAY: Rough roads to get smoothed over in $1.8 million reconstruction project 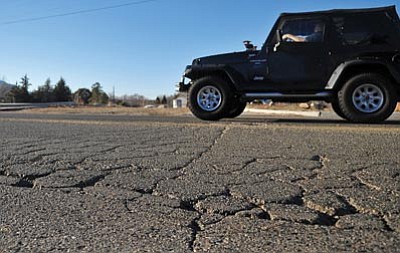 PRESCOTT - In preparation for about $1.8 million worth of pavement reconstruction work this fall and next spring, the city entered into a $266,540 contract this week for the necessary engineering work.

Over the next six months, the Shephard-Wesnitzer, Inc. firm will be designing seven road-reconstruction projects that will be spread throughout the city.

Prescott Engineering Services Director Mark Nietupski said he expects some of reconstruction projects to begin this fall, while others likely will wait until early 2014.

The projects will include portions of major city streets such as Willow Lake Road, Delano Avenue, and Miller Valley Road.

In a unanimous vote on Tuesday, the Prescott City Council approved the Shephard-Wesnitzer design contract. Nietupski said the design work should be complete by about August.

While money for the design contract will come from the current fiscal year's budget, the construction costs are expected to be in the budget for the coming year.

Nietupski explained that the street reconstruction program is just one portion of the city's pavement maintenance program, which also includes: pavement preservation (seal coats, chip seals, and overlays); and pavement rehabilitation (milling/removal of the top two to three inches of pavement and re-placement with new asphalt).

The streets on the reconstruction schedule have all deteriorated to the point where they are "beyond rehabilitation," Nietupski said.

City Councilman Chris Kuknyo questioned Nietupski about the need for outside engineering services.

"The question I get asked frequently is - we have a lot of engineering staff; why do we keep hiring (outside) engineers?" Kuknyo asked.

Nietupski responded that the city has a "very aggressive street improvement program," and that its engineering staff is kept busy dealing with the construction projects that are under way.

"I can assure you that the staff is fully committed and is industriously working," Nietupski said. "We use our staff to manage projects."

All of the streets scheduled for reconstruction this year have been in the city's capital improvement program for years, he said.

A number of factors go into determining the schedule, Nietupski said, noting that issues such as traffic volumes and the pavement's level of "distress" enter into the decision. In addition, he said, "We try to spread the work throughout the community."

The exact schedule for the individual road-construction projects has yet to be determined.

"The schedule will be developed as we complete the design," Nietupski said. "It is anticipated that some construction will begin in the fall, and some after the first of the (2014) year."

The money for the engineering and construction will come from the city's 1-percent sales tax for streets and open space.