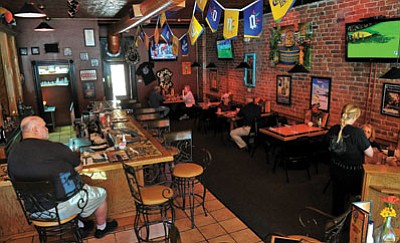 Matt Hinshaw/The Daily Courier<br> Above, Patrons begin to fill the El Charro Restaurant’s Cantina Manana for lunch. Below, Owners Amanda and Gary Denny display some of their favorites, a Baja Stuffed Relleno, Grilled Fish Tacos, and a Shrimp stuffed Avacado along with a Fresh Peach, Black Berry and Mint, and a Jumbo Coronaita margaritas.

PRESCOTT - El Charro Restaurant & Cantina operates out of a red-brick building that has been a Mexican restaurant since 1959 and has been owned by branches of the same family for 31 years.

El Charro serves as a gathering place for long-time Prescott families who have been coming since the start, said Denny, a fifth-generation Prescott resident.

"It's like a family reunion and high school reunion every night," said Denny, a 1978 graduate of Prescott High School."

One family has been coming on Monday nights for 30 years, Denny said. Fifteen of his high school classmates visited during the Cinco de Mayo weekend.

Gary bought the restaurant from his aunt and uncle, Kurt and Ronda Mann, in 2000.

Gary started in the field in 1983 when he opened Pudge & Asti's Pub at the current location of the Apache Lodge. It is now on Sixth Street.

The Dennys opened the upstairs cantina, or bar, July 2, 2009, because overhead costs made it difficult for the restaurant to survive, Amanda said.

They began serving breakfast in March 2012.

"It was pretty much economic reasons," Gary said. "Our cooks start at 4:30 in the morning to make the food fresh every day. Basically, all we did was throw in a waitress into the mix. The overhead is running by the hour."

He said cooks prepare all food to order.

"The core of our menu has not changed since 1959," Denny said. "We serve memories: the same sauces, tamales, (chili) rellenos."

Customers can start their days at El Charro with breakfast, served from 6 to 11 a.m.

The breakfast menu includes a number of plates for $7.95: chorizo and pina empanadas (pastry pockets), chorizo pancakes, Mexican French toast (half order), huevos (eggs) a la Mexicana, and relleno and egg breakfast. Prices range from $3.50 for oatmeal to $10.50 for a full order of French toast.

The menu for lunch and dinner includes tacos, a la carte, Mexican specialties and combination plates.

The selection of tacos ranges in price from $3.50 apiece to $11 for three, including varieties such as grilled shrimp, tilapia, carnitas and carne asada.

The a la carte menu ranges from $3.25 for a one-bean tostada to $15 for three crabmeat or shrimp stuffed rellenos.

Mexican specialties start at $6.95 for one flautus deluxe (corn tortilla) to $12.95 for camarones a la diabla (sautéed shrimp) and the carnitas plate.

Combinations plates range in price from $9 to $10.50, and include enchiladas, tacos, tamales and burritos.

Hot-off-the-grill plates contain some of the priciest orders, such as $16.95 for "Gary's favorite jalopeno steak" to $24 for shrimp, steak or chicken fajitas.

Fajitas and chili rellenos are the most popular dishes, Amanda said.

"Everything is made from scratch," she said. "Making the rellenos is a two-day process."