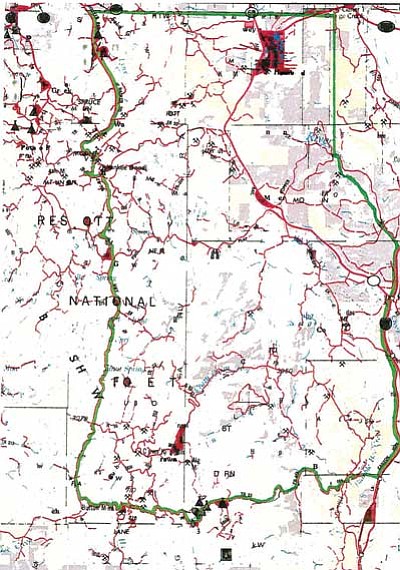 Map above shows boundaries of the re-activated Big Bug Mining District, as of May 24, 2013.<br> Courtesy Map

Since the first meeting in January this year, local mining claim owners have generated growing interest in establishing a mining district. On May 24, Owen Wildman, interim chairman, filed with the Yavapai County Recorder's Office in Prescott the paperwork to re-activate the Big Bug Mining District.

From Lynx Lake east to Dewey-Humboldt, and south to Crown King and Bumblebee, from Senator Highway to Interstate 17, the district's boundaries cover nearly 400 square miles.

Wildman, accompanied by a dozen or so mining enthusiasts and prospectors, filed the district's amended by-laws and the boundary map. Initially, they had talked about establishing the Humboldt Mining District, but Wildman said he heard it was better to re-activate an old district than to start up a new one.

BBMD member Jerry Brady said the U.S. War Department authenticated the district in 1871. According to George Riddle, chairman of the National Association of Mining Districts, a meeting of the district hasn't taken place for about 100 years. No one is sure when it petered out, but Wildman also found a 1916 boundary map through Sharlot Hall Museum.

"We have enlarged the (1916) boundaries considerably," Wildman said.

The 1869 boundary extended north to the base of Mingus Mountain, but by the time of the 1916 map, the boundary did not quite reach Highway 169. The district now includes Crown King and Cleator, which at one time had their own districts. Wildman said if any of the mining towns want to re-establish their own districts, the BBMD would be happy to annex those areas.

Residents within the district are not included as members; however, mining claim owners within the boundaries, or anyone in mining related fields, are instant members. Wildman estimates at least a thousand mining claim owners exist within the boundaries, and said most probably don't realize the Big Bug district has been re-activated. He plans to mail out an informational letter soon to welcome owners to future meetings and asking for their participation.

In addition to plans for a variety of committees, including road studies, historical site projects, abandoned mine reclamations projects, fire watch aid, and watching for mining scam activities, the district will form four other committees for:

• Setting up a custom mill.

Senior Research Specialist Thomas Combrink said he and the visitors appreciated the "intertwined history of these resources, mining and tourism."

"The region definitely has tourism potential, with an abundance of mining and territorial history," Comrink wrote in a letter to BBMD Vice Chairman Kevin Leonard.