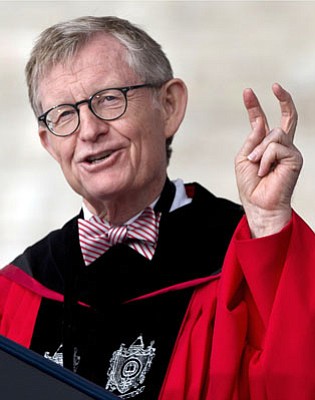 Carolyn Kaster/The Associated Press<br>Ohio State president E. Gordon Gee gesturing as he speaks during the university's spring commencement in Columbus, Ohio, on May 5, 2013. Gee is retiring as of July 1 following the revelation of recorded remarks in which he criticized Notre Dame, Roman Catholics and the Southeastern Conference.

E. Gordon Gee, the president of Ohio State University, is by all accounts a brilliant man. In addition to serving his second term as president of OSU, he has also led Vanderbilt University, Brown University and the Universities of West Virginia and Colorado. According to an article in Time, Gee is the best college president in the country. But not for long; Gee will leave his position on July 1.

Gee claims to be stepping down voluntarily, and in deference to his many contributions to OSU during almost 15 years as its president, he was allowed to "resign." But the timing of the announcement, and the fact he gave the university less than 30 days to find a replacement when a year is the norm, suggests that Gee's penchant for placing both feet in his mouth when he speaks has made him a liability that OSU is only too happy to shed.

Gee instigated the latest controversy during a December meeting of the university's athletic council when he attacked Notre Dame and Catholics in general. Gee claimed the Irish were not invited to join the Big Ten because priests don't make good partners. He went on to say, "The fathers are holy on Sunday, and they're holy hell on the rest of the week. You just can't trust those damn Catholics on a Thursday or a Friday." When the OSU trustees got wind of their president's comments they were mortified. After intense negotiations with Gee, they created a remedial plan for him to "address his behavior," including issuing apologies and obtaining professional help with his communication skills.

When a recording of Gee's original remarks was leaked to the press in March, it included negative comments about the Southeastern Conference and the Universities of Cincinnati, Kentucky and Louisville. The ensuing firestorm sealed Gee's fate, leading to his resignation on June 4. In a news release Gee said, "After much deliberation, I have decided it is now time for me to turn over the reins of leadership to allow the seeds that we have planted to grow. It is also time for me to reenergize and refocus myself."

While Gee's December comments are offensive and totally inappropriate in any setting, they are particularly egregious coming from academia, which is purportedly a bastion of tolerance and diversity. But Gee's downfall wasn't necessarily what he said, but the context in which he said it. His remarks would have barely registered with the public if they were directed at a philosophy department or an English professor, his own or another institution's. However, they involved athletics. With all due respect to Catholics - and Gee's fellow Mormons - our country's most popular religion is sports. Think otherwise? There's a reason why ESPN has a channel - ESPNU - dedicated solely to college sports. The same can't be said for college chemistry.

OSU has a budget - almost $5 billion - larger than the budget for the state of Delaware. The university has more than 40,000 employees, operates one of Ohio's largest and best hospitals, is a major research center and has a small-business incubator. And yet the only thing most Americans hear and read about OSU is their athletic program, despite the fact it contributes only $150 million, or less than 3 percent, to the school's overall budget. More people know that football coach Jim Tressel resigned in 2011 over a tickets-for-tattoos scandal - another instance where Gee demonstrated his unique brand of foot-in-mouth disease - than are familiar with OSU's academic accomplishments, including its outstanding faculty and students.

While most university presidents take office unprepared for the spotlight - and the unique challenges - that athletics brings, at this point in his career Gee is certainly not one of them. This is his sixth ride on the presidential carousel and several were at schools with high profile athletic programs. At his previous stop, Vanderbilt, he dismantled the athletic department and folded it into one of the university's academic departments. That move, although deemed successful, was not without controversy, or publicity.

In the Time article, Gee was quoted as saying "Being president of a major public university is the most political nonpolitical office around." That's particularly true when the topic is sports. Unfortunately for Gee, it was a lesson he had to learn the hard way.

Jordan Kobritz is a former attorney, CPA, and Minor League Baseball team owner. He is a Professor and Chair of the Sport Management Department at SUNY Cortland and is a contributing author to the Business of Sports Network and maintains the blog: http://sportsbeyondthelines.com. Jordan can be reached at jordan.kobritz@cortland.edu.