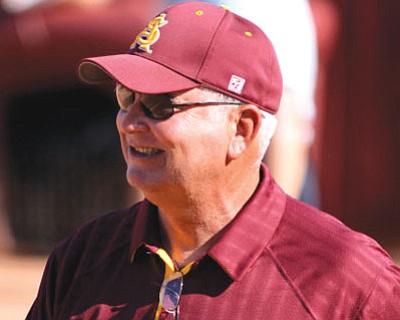 Clint Myers, who has made his mark as both a college baseball and softball coach in Arizona for nearly 40 years, is taking his game to NCAA Division I Auburn.

Myers, who also served as an assistant baseball coach at Yavapai College in Prescott in the early 1980s, left his post as head coach of Arizona State University's softball team for the same position at Auburn, the Alabama-based university announced Friday.

Myers led ASU softball to national titles in 2008 and 2011, and to the Women's College Series seven times in eight seasons.

He also has a long history with the Arizona Community College Athletic Conference (ACCAC).

Myers led Central Arizona to the 2002 national title in baseball and to six national championships in softball, including five straight from 1988-92. He was inducted into the National Junior College Athletic Association (NJCAA) Softball Hall of Fame in 1998 and the Arizona Softball Foundation Hall of Fame in 2001.

Back in 1980, he headed north to join the Yavapai College baseball staff as an assistant coach for three years. The Roughriders won Arizona league championships during his tenure on staff from 1981-83.

Myers told The Associated Press on Friday that the opportunity to coach in Auburn "was one I absolutely could not pass up."

Myers is a former baseball player at ASU, where he played on College World Series runners-up in 1972 and 1973. He was a third-round pick by the St. Louis Cardinals.