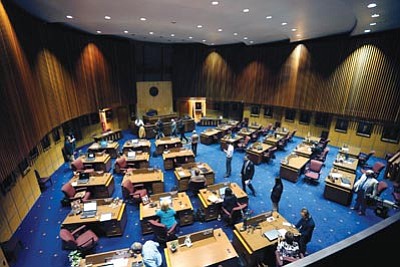 PHOENIX - The Arizona Legislature adopted a major overhaul of the state's complicated sales tax collection system in the final hours of the session Thursday night after a deal with cities and towns removed a major roadblock.

Municipalities led by the League of Arizona Cities and Towns were able to hold off the overhaul after raising concerns they would lose revenue. Gov. Jan Brewer made the overhaul a priority of the legislative session and made major compromises before the final deal was struck Thursday.

The Senate passed House Bill 2111 unanimously and the House passed it with just one opposing vote.

The overhaul would not impact what ordinary consumers pay at store checkouts. Instead, it will make it easier for businesses that pay a so-called Transaction Privilege Tax. The deal leaves in place a tax on new construction that funds many city projects but eliminates it for companies that do home and other repairs.

Municipalities could still lose revenue, but the compromise gives them better ways to track revenue and clarifies how audits are done, said the sponsor, Rep. Debbie Lesko, R-Peoria. The deal that was finally cut Thursday happened after months of impasse.

"The League came to the table and gave us some reasonable language about what they wanted," Lesko said.

The deal came together as the Legislature pushed out a budget and Brewer's Medicaid expansion plan and made a rush to finish work and adjourn Thursday night.

The overhaul targets the state's complex system where businesses are taxed on their revenues, at different rates by different entities, including the cities, counties and the state. The tax on contractors and other business transactions known as the TPT, and the state alone is estimated to collect $3.8 billion of the state's total revenue of $8.6 billion this budget year. Businesses also were subject to multiple audits and had to file returns in every city, county and town where they operated.

That system will be eliminated, with the state overseeing all those functions.

The biggest worry for cities and towns was the proposal to change how they collect from builders and other contractors. Currently, they pay based on 65 percent of the cost of the total job, 35 percent of which is for labor costs. Much of that tax now flows to the community where the building is done, helping offset increased costs of providing services.

Cities were also worried about their inability to track revenue to pay for bonds and other expenses. A part of the deal struck Thursday addressed that issue.

Brewer's original proposal would have eliminated the contractor tax system in favor of one where they pay taxes on supplies when they buy them and eliminated tax on labor. That would have sliced a huge chuck of revenue from growing cities which don't have major retail or wholesale operations.

The approved compromise allows the construction sales tax to continue but still follows the same principal for tradesmen who do home repairs like plumbers and air conditioning repairmen. They would pay sales tax just on parts and equipment when they buy it. All those taxes are eventually passed on to consumers.

The two other major parts of the overhaul - a single point of administration and auditing - move into a state system of oversight. That will allow Arizona to collect sales taxes on Internet sales if Congress passes a law being considered allowing that collection.

The Legislature voted to adjourn its 2013 session early Friday morning after passing a slew of other bills, including an election overhaul that could make it more difficult for voters to obtain and return mail ballots. Biggs had to beg for extra votes to get the measure opposed by Democrats and voter outreach groups passed in the Senate.

Among the bills left on the floor was a proposal that would have prohibited abortion clinics from using Medicaid dollars to fund administrative costs and allowed for unannounced inspections, a top GOP priority.

Still, Brewer signed more than 100 bills advanced by conservative Republicans throughout the marathon session, including a measure that bars cities and counties from destroying guns turned over to police at community buyback events and instead requiring that they be resold. She also signed bills that will wildly increase campaign finance limits for state candidates and require unemployed workers to present documents showing they were fired before they can receive benefits.

Through it all, Brewer made it clear that the Medicaid expansion was her top priority. She held multiple rallies featuring low-income patients on the Arizona Capitol lawn and during the final month of the session, Brewer refused to sign any other bills until lawmakers passed a budget that included the health care expansion.

The Medicaid plan would cover people making between 100 percent and 138 percent of the federal poverty level and restore coverage to more than 100,000 childless adults who lost Medicaid coverage because of a state budget crunch. About 1.3 million Arizonans already are covered by the state's plan.