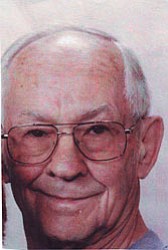 David lived with his grandparents, Millard and Geneva Springer, from ages 7 to 14, when he moved to Ellsworth, Maine, and worked as a lumberjack with his dad and brother. When he was 16 he started to work on a turkey farm. His first car was a 1933 Ford coupe; it helped him to deliver the turkeys.

When David came home, he became a machinist and worked at the Naval Rework Facility, North Island, in San Diego for 33 years. He then worked with Bob Greene at Auction Productions until 2009.

David was a very loving man and was always willing to help someone. He was a very skilled machinist and enjoyed working with wood. David spent many Septembers going fishing in Vancouver, bringing home lots of salmon. He was a wonderful father and grandfather. We love and will miss you forever.

David is survived by his children, David Springer, Diane (Scott) Campbell, Danna Dore, Donna (Mark) Zimmerman, Darrin (Emily) Springer, Dennis (Julie) Springer and Christine (Bob) Greene; more than 20 grandchildren; 10 great-grandchildren; and his lady love, Mary Tiffany Donahue - thank you for the 12 years of your love and happiness. David was very proud of his children, saying they were his greatest gift.

He is preceded in death by his parents, Harvey and Beatrice, brother Harvey, and sisters Betty and Gloria.

A visitation will take place from 4 to 6 p.m. on Friday, June 14, 2013, at the Arizona Wakelin Bradshaw Chapel, corner of Navajo and Valley Road in Prescott Valley, with a celebration of David's life at 6 p.m. The American Legion Post 78 in Humboldt will host a luncheon at noon on Saturday, June 15, 2013.

You are invited to log on to www.ruffnerwakelin.com to sign David's guestbook and share a memory with the family. The Arizona Wakelin Bradshaw Chapel assisted the family with the arrangements.