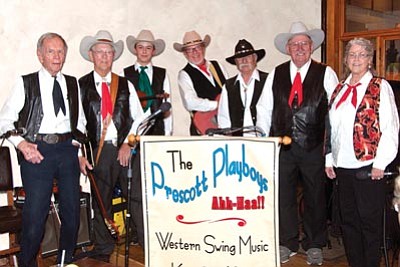 Lee Power/Courtesy photo<br> The Prescott Playboys will perform in the Prescott Opry concert at the Elks Opera House 7 p.m. Thursday, June 13. Tickets are $12-$17.

Fiddling virtuosos - two teenagers and a 90-year-old master - will be in the spotlight Thursday, June 13, when the Prescott Playboys perform in the Prescott Opry concert at the Elks Opera House.

The teens are Bix Glidden and Jordan Brambili, both 15, who brought home top honors in April from the annual Bob Wills Day festival in Turkey, Texas. Bix won the overall fiddle contest and the two of them, together, won the twin fiddle contest.

Quite a feat, says Fred Spears, whose Playboys band features both young musicians, along with Ray Gardner, the 90-year-old who is well known in the Prescott area for his fiddling prowess and is a mentor to both Bix and Jordan.

Spears, too, has been an inspiration to the two teens. "I am very proud that I was able to help these young boys along," he said.

The Prescott Opry show begins at 7 p.m. Tickets are $12 to $17, with group, senior and student discounts available. To buy tickets, call the Elks Opera House box office at 777-1370 or log onto www.elksoperahouse.com. Tickets will also be for sale at the door one hour before the show starts.

Even though Spears' career was in the military, he, too, has a long musical history. Before he could indulge his passion, he was a military technician for the Air National Guard of Arizona, retiring in 1995 as a senior enlisted adviser after 42 years of service. When he was young, he played for family gatherings, then he grew up, got a job, married and had children.

Spears' hiatus from music ended when he left the military and moved to Prescott in 1998. He formed the Prescott Playboys in 2000.

"Music has always been a big part of my life," he said. "After I retired, I had more time for hobbies," music now being a primary focus of his time.

Spears, largely self-taught, plays electric guitar and sings. His inspirations have been "old, great country stars," such as Wills, George Strait and Hank Williams. His genre is country and western swing.

Besides the melodies of Wills, they will play the music of Merle Haggard, Strait and Ray Price, sticking to "all the old traditional country stars," Spears said.

The audience can expect "a band that sings traditional country music and dresses the part," he said. "We come out in white Western shirts, hats, black vests, red string ties - and boots, yes, indeed."

in Thursday's show will be Ken Moorehead and American Traditions, known for three-part harmonies and "sly humor"; Anita Wells, who has a heart for gospel; the Brush Arbor Revival gospel ensemble; and another young fiddler, 12-year-old Kiva Keith, a member of Sharlot Hall Museum's musical youth group, Generations.

More treats than music are in store for Thursday's Prescott Opry show. Those in attendance will have a chance to win a wood and leather rocking chair from the Rancher's Wife worth $500 or a $500 travel package donated by Master's Touch Tours.