Column: By George, local tennis cracks have been filled for the last time 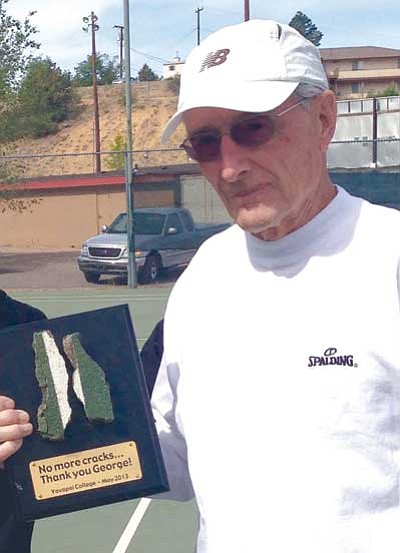 Lori Youngdahl/Courtesy photo<br> George Reynolds gets a plaque for his tireless efforts on behalf of repairing the cracks at the Yavapai College tennis courts in Prescott.

The six Yavapai College tennis courts were built in 1974, along with the college baseball diamond and two Little League fields, by the college and City of Prescott with a 25-year intergovernmental agreement that obtained matching federal funds. Both entities were growing, and this agreement did a good job in helping the community and college expand recreationally in a great central location.

What may not have been looked at too hard during that time was what would take place when those courts needed major work, and where that money would come from. There were never any user fees in place to create a money stream to help with future repair and replacement costs.

The life of an asphalt tennis court is approximately 18 to 20 years, and the City of Prescott did provide an overlay of asphalt on the courts in the early '90s which prolonged the courts' life. But by 1999 things were really bad again, and the college now had control of the courts but no real plan for upkeep.

The upper two courts were in such bad repair that they were a safety issue. Discussion of shutting those courts down was the probable solution.

The cracks were wider than your fist in a few places, heaving was taking place and the surface was crumbling apart; being held together only by the marginal paint that was still existing. You could serve a ball on court six and on occasion it would hit one of the wide cracks and return the ball on its own. Pretty scary.

The public tennis players from a program called "Drop-In-Tennis" decided to take the matter into their own hands. Out of the blue, a tennis player by the name of George Reynolds volunteered to see what he could do to bring this facility back to life and not let those two courts or any of the others get shut down.

George met with the athletic director and maintenance department to get their approval and help. He took the reins and came up with a solution. A group of volunteers donated money for materials and tackled this renovation successfully.

He and his group jack-hammered the area that was heaved, opened and removed the cracked/loose asphalt, filled them with concrete and sand, and finished it with liquid levelers, paint and new white lines.

It was one painful endeavor. Despite a lot of sore knees, those courts came back to life. And this work not only saved this facility from closing, but saved thousands of dollars as well.

What George and the others didn't realize at that time was that this work would need to be done annually. Prescott's wide temperature range leads to expansion and contraction as the cracks open up each winter and then spring. Not to mention the courts need a complete repainting every five to six years.

George, now in his early '80s, has been doing this job as a volunteer (along with many volunteers) for 14 years. He has also spearheaded expanding the tennis patio, adding benches and trash cans, building a backboard, and a wheel-chair ramp to the patio, and that's the short list of what he's done. Not to mention the high school courts and even private facilities.

Figure the money saved at six courts - times $2,000 per court (low average), times 14 years - and the money saved is way over $100,000. Not to mention the safety, fun and health factor for hundreds to thousands of players during that time.

So it's with this column I want to personally thank George and his band of volunteers for all of us because it's people like him who make Prescott what it's all about - "Everybody's Hometown" - a real special place to live, work and play.

Column: Great work to get YC tennis facilities up to par
Column: Lobbing ideas over the Yavapai tennis courts
Column: Local tennis lover honored by USTA
A day in the life of a facility
George does it again; win U.S.Open tickets