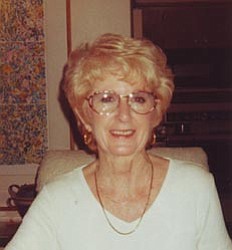 Coleen Ann Johnson joined the angels in heaven July 22, 2013, at the Hospice Marley House. She was born July 12, 1934, in Oklahoma City to Charles and Lucille Malone. She lived most of her life in Southern California.

Coleen enjoyed working as a travel agent for 40 years. She was very fortunate to go on many cruises, and travel to Asia, Europe and South America throughout her career. She moved to Prescott 5 ½ years ago to be near her family.

A celebration of life will be planned at a later date.