Water restrictions ease due to higher capacities, lower use 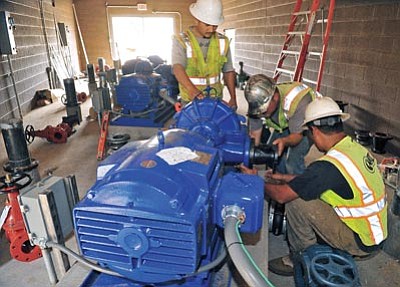 Matt Hinshaw/The Daily Courier<br>Pipefitters with CLM Earth Movers check pipe fittings on one of the water pumps inside the new City of Prescott Zone 27 pumphouse near Gurley Street Wednesday afternoon.

For years, the City of Prescott faced an annual summertime ritual: warning its residents against high water use, and putting water restrictions into effect.

Throughout much of the 1990s and early 2000s, the restrictions came - like clockwork - during June and July, as hot, dry weather brought a spike in outdoor watering.

A number of factors have come into play recently, however, to affect those restrictions. In the past several years, the summers have come and gone without water-use warnings from the city.

Officials say the gradual increase in the city's ability to store water, along with an aggressive water-conservation program, have simultaneously brought higher production capacities and lower water use.

This week, Prescott City Council members took a step to match current conditions with code restrictions. In unanimous action, they adopted an ordinance that raises the level at which water-use restrictions would go into effect.

Engineering Services Director Mark Nietupski told the council that the city's water-restriction code was last adjusted in 1997. Since then, he said, the city has added millions of gallons per day to its water-production capacity.

He estimated the cost of the recent water-tank upgrades at "tens of millions of dollars."

Meanwhile, Nietupski said, citizens have reduced their water use. A city water-conservation program went into effect in 2006, bringing with it low-water-use incentives, as well as several rounds of water-rate increases.

Mayor Marlin Kuykendall pointed out that the city often experienced daily water use at more than 11 million gallons in past years.

"So, our water conservation is pretty evident," Kuykendall said, adding that the ordinance change "has nothing to do with increased consumption."

The city code includes four "resource status" levels, which would trigger various levels of water restrictions. Status I is defined as water demand that is less than safe water capability, while Status II goes into effect when demand is greater than safe production capability for three consecutive days.

The code gives the city manager the authority to evaluate the status levels and declare the water conservation levels.

The levels and restrictions range from encouraging residents to minimize water use for irrigation (level I) to declaring a "water crisis," which would involve restrictions or prohibitions on use of potable water for irrigation or dust control (level IV).