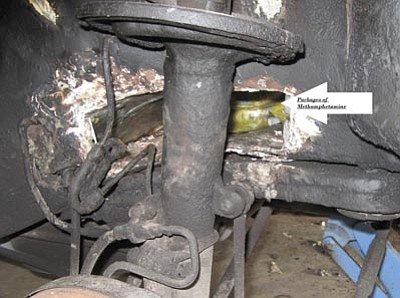 Courtesy YCSO<br /><br /><!-- 1upcrlf2 -->A Yavapai County Sheriff’s Office deputy found 16 pounds of meth in a hidden compartment in a wheel well during a traffic stop Tuesday on northbound I-17.

A Yavapai County Sheriff's deputy arrested two men Tuesday after he found 16 pounds of methamphetamine valued at $150,000 in a hidden compartment in a their car's wheel well after a traffic stop on northbound I-17.

At 9 a.m., a Yavapai County Sheriff's Office K9 deputy stopped a blue 2005 Toyota Corolla on north I-17 for equipment and moving violations.

When the deputy spoke with the driver Darren Keller, 23, and passenger Jose Ramirez, 22, both of Colorado they said they were heading home from Phoenix, YCSO Spokesman Dwight D'Evelyn said.

After the deputy spoke with Keller about the traffic violations, he asked if there were any drugs in the vehicle, Keller said there were no drugs in the car and consented to a search, D'Evelyn said.

While checking the front passenger side of the vehicle, the deputy detected an odor of marijuana and traced its source to a bag of marijuana in a passenger seat pocket, D'Evelyn said.

Neither Keller nor Ramirez had medical marijuana cards.

The deputy deployed his K9 for an exterior sniff of the vehicle and when the dog was near the rear driver's side of the vehicle, the deputy saw the K9 alert to the wheel well and eventually scratch this area, D'Evelyn said.

The deputy took a closer look in the wheel well and saw a spot covered with fresh body putty and paint.

"When the putty was removed, it revealed a metal cover which, when detached, exposed a compartment that extended to the opposite wheel well," D'Evelyn said. "The compartment was found to contain nine wrapped packages of methamphetamine with a total weight of 16 pounds. A conservative wholesale price for this load is well in excess of $150,000."

Both Keller and Ramirez said they did not know the methamphetamine was in the car, D'Evelyn said.

Keller and Ramirez were booked at the Yavapai County Jail on felony charges including transportation of a dangerous drug for sales and possession of dangerous drugs for sale.