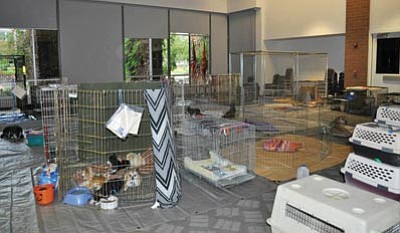 While the Yarnell Hill wildfire raged nearby, various disaster relief sites were dealing with a virtual menagerie of animals.

Horses, dogs, cats, birds, donkeys, a rabbit, a pig, and a hamster all found refuge in shelters from Peeples Valley to Prescott in early July.

In all, disaster relief workers say they took in upwards of 170 animals. While most are now back with their owners, a few remain in the shelters as residents deal with home that were destroyed by the fire. And 15 cats are still without a permanent home.

Yarnell veterinarian Kate McCullough said her Muleshoe Animal Clinic took in more than 75 animals during and after the fire.

Among the total were 50 cats that came from a single home. The cats reportedly fended for themselves during the fire, coming and going from the house. After the Yarnell evacuation was lifted, the owner alerted rescue workers that he could no longer care for the cats.

McCullough's clinic took them in, and has been caring for them. "Once we got them fed and watered, they're OK now," she said, adding that the care included spaying and neutering of the cats, and treating them for fleas.

Now, a cadre of animal lovers is working on adopting out the cats. "We've found homes for quite a few," McCullough said.

But about 15 cats - ranging in age from six weeks to a couple of years - still remain.

Anyone interested in adopting one of the cats can call the Muleshoe Animal Clinic at 928-427-3855. While some of the cats are tame, McCullough said others are wild.

The clinic also is looking for a home for a pig that wandered in the Yarnell community during the fire, before being taken to the clinic.

"She has so much personality; she's hilarious," McCullough said of the pig. Noting that workers have become attached to the pig, McCullough said the clinic would like to find a home where the pig might live in a petting zoo or be used for breeding.

Just like with the community outpouring for other aspects of the fire, animal rescuers for the Yarnell fire say the effort received tremendous help from residents and businesses.

"Our phones were just ringing off the hook," said Bret Hone, ranch manager at Hidden Springs Ranch, a thoroughbred horse-training ranch in Peeples Valley that took in about 20 horses during the fire. "We had unbelievable support."

Because Hidden Springs Ranch has a full staff of professionals on board, Hone said he told the callers that help would be better directed to the families of the fallen firefighters and the Yarnell residents who lost their homes.

"(The rescue horses) fit right in here," Hone said. "There was no problem taking them in."

When the Doce wildfire threatened the Williamson Valley area in June, the Prescott Rodeo Grounds served as the large-animal shelter. But with the Prescott Frontier Days Rodeo going on the week of July 4, Hidden Springs stepped up.

"We were right here, close-by," Hone said of Hidden Springs' Peeples Valley location. "And some (of the horses) had to get out of there fairly quickly."

The Hidden Spring Ranch is located on the east side of the highway, and was not evacuated, Hone said.

While owners came to get most of the sheltered horses in the day or two after the evacuations were lifted last week, Hone said Tuesday that Hidden Springs was still sheltering two horses, owned by Yarnell residents who lost their home in the fire.

"They're still living in a motel up in Prescott," he said of the horses' owners.

In Prescott, Animal Disaster Services, a sister organization of United Animal Friends, sheltered 83 animals, including dogs, cats, birds, a rabbit, and a hamster.

Team Leader Becky Salazar said the shelter on the Yavapai College campus opened on June 30, and cared for animals until about July 9.

"The community was awesome," Salazar said. Along with people who walked in the door with donations of dog and cat food, she said many area businesses donated fencing, kennels, food, and incidentals such as paper towels.

"What impressed me most was the giving nature of the college and the businesses," Salazar said. "Anything we asked for - we just called them up, and we got it."

Among the animals at the Yavapai College shelter were six dogs that animal volunteer Kim Lytle had to evacuate from her Peeples Valley home.

Later, Lytle, who operates Peteys Playground - a non-profit organization that helps senior citizens with their pets - also offered shelter to dogs whose owners had lost their homes.

Lytle also mentioned the support from the community. "From our perspective, there was an outpouring of generosity from animal lovers," she said.

Protecting Fido and Fluffy: Do you know what to do if you are evacuated?
YARNELL HILL FIRE: Yarnell and Peeples Valley residents ordered to evacuate
UAF collecting donations for animals evacuated due to Wallow fire
Yarnell evacuees find refuge at Red Cross disaster relief center
'Tenderfoot Fire' near Yarnell burns 600 acres, 3 structures (VIDEO)