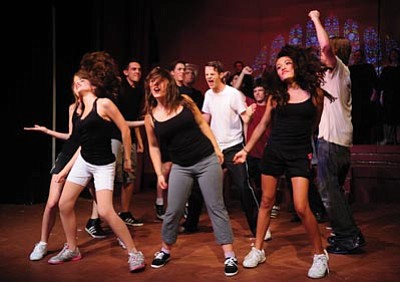 Les Stukenberg/The Daily Courier<br>The cast sing and dance their way through a dress rehearsal Monday night for the Prescott Center of the Arts Teen Summer Stock Ensemble of Footloose the musical.

"Footloose" seems the most apropos title for Prescott Center for the Arts Teen Summer Stock Ensemble, because the vision from the outset of the performance is feet working hard as they dance in song across the theater's main stage.

"Eight hours for what?" the opening chorus asks. "Kick off your Sunday shoes ... Everybody cut loose."

PCA's cast and crew for the production have been in rehearsal from 2 to 9 p.m. every day for five weeks. The play opens at 7:30 p.m. this Thursday, and continues at the same time Friday and Saturday, with 2 p.m. matinees on Saturday and Sunday. Tickets are $15 for adults and $10 for students. To order, call the box office at 445-3286 or log onto www.pca-az.net.

This popular musical is based on a film that came out in 1984, and begins with the story of Ren McCormack (Nolan Sturdevant) and his, mother, Ethel, who leave Chicago for the small country town Bomont, Texas, to start a new life.

Ren had belonged to a Chicago teen dance club, where he vented the stress of his eight-hour workdays. But he dances into nowhere in Bomont. Dancing was forbidden in the town after the deaths of four teenagers when their car careened off a bridge on their way home from a dance.

From that time on, the teens the had lived with "No dancing of any kind anywhere within the town limits of Bomont."

And, in response, they sang, "Everybody's watching you. Somebody's, somebody's eyes are watching you," to describe their smothered existence.

Unbeknownst to their elders, the teens don't lose their joie de vivre.

The person most vehement about the "thou shalt not dance" edict is gentle Reverend Shaw McCormack (John Bryan), whose daughter, Ariel (Emma Archambeau), is a typical teen. She finds ways to circumvent her parents' wishes to protect her.

When Ren is about to give up on his crusade to revive dancing in Bomont, his friends pressure him into going ahead with his plan to persuade the town council the reinstate dancing. He gets a solid thumbs down from his elders. This leads to a face-off between Ren and Reverend Shaw.

In the grand finale, a huge dance, everybody does indeed cut loose.

Summer stock's concept is to give the young actors a real-life experience of a professional actor, starting with long rehearsing days and learning how to get into their characters' personae.

Bryan, who plays the preacher and is one of the few adults in the cast, said of the teens, "They work so hard to do their craft. I am impressed by their professionalism for such a young age."

Although this is Sturdevant's first summer stock at PCA, he has been in many local plays.

Now studying youth ministry and music at Yavapai College, he said, "Footloose" has been "an awesome experience - grueling and hard work." And for him, playing Ren "is a dream role." Ren is "a complex character. He has to be forceful, a peacemaker and lead a revolution."

And, Sturdevant added, he was determined to put his "own spin" on the character so "people don't think I'm Kevin Bacon," star of the classic film.

Andre Sylvester is yet another formidable young actor in his role as Willard Hewitt, a country bumpkin. A sophomore at Yavapai College and a stage veteran, he is participating in PCA's summer stock for the third time.

His past roles have usually been father-types, he said, because "I am older and a little bigger." Working with younger actors has been "an interesting experience. They do a beautiful show." Of his own role as "fun-loving dummy," he said his challenge has been to "dummy him down every day."

Archambeau is just 14 and a student at Arizona Agribusiness and Equine Center in Prescott Valley. She "loves acting and singing" and describes her character, Ariel, as outgoing, adventurous, fun and a kind spirit - a cover-up for mourning her brother's death and the relationship with her father that suffered after that.

Her lesson playing Ariel was "believing in what's right and standing up for what you believe in."