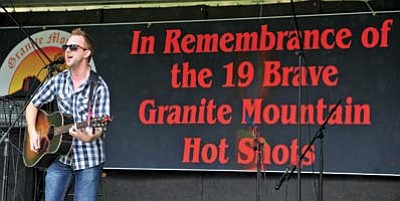 Matt Hinshaw/The Daily Courier<br> Andrew Millett of Thoughts Like Rockets performs during the Rock the Quad concert at A.C. Williams Granite Creek Park Saturday in Prescott. Donations from the concert benefit the Boys and Girls Clubs of Central Arizona and the families of the Hotshots.

Rain didn't stop a crowd from gathering at Granite Creek Park Saturday afternoon to enjoy music during the Rock the Squad Concert that benefited both the Boys and Girls Clubs of Central Arizona and families of the Granite Mountain Hotshots.

With music all around them, a group of teens nearby played ball, while others just listened and moved to the tunes they heard.

Some of the bands at the concert were local like As the Tide Turns Red from Prescott Valley, while others were from the Phoenix area, said Kerry Oliver of Green Kite Records, which presented the show.

Oliver said Green Kite Records works with Rock the Vote to make presentations to students and donate musical instruments to schools, which is critical as school budgets are cut and art and music programs can fall to the wayside.

Briana Newcomer, one of the organizers, added, "We wanted to do something to help the Boys and Girls Clubs and the firefighters. The bands are eager to get out here, get noticed and develop new fans."

"We like to support our local bands," Ian Welch said. "We know these guys and went to the same school as they did."

"We help the artists and bands to get them to the next level and avoid pitfalls," she said. "We work with them on presence, sound, equipment, image, business skills, media relations and more."

Deveroux has been touring all over to support her "Whiskey Lover" single that can be heard on Q 102.9 FM, Newcomer said.

"We began playing together in June 2011," said another young musician Harley Priest with As the Tide Turns Red.

Colton Priest said their music ranges from the 1980s through today.

The 100 Club Board Member Erick Johnson and several volunteers were at the concert under a canopy, raising funds for the Granite Mountain Hotshots families and The 100 Club.