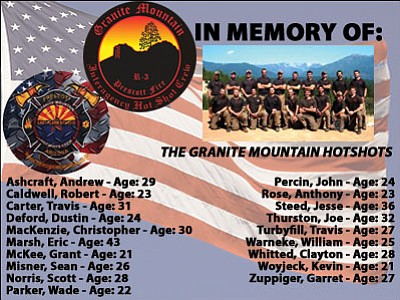 Community members watched the news Sunday as the fire continued to grow and threaten the town of Yarnell. But no one was ready for the announcement Sunday afternoon that 19 firefighters had perished while fighting the blaze, making it the worst wildfire tragedy in Arizona history.

The rest of the night was spent in worry, tears and speculation as the Prescott Fire Department scrambled to notify families before they heard about the tragedy from another source, while still giving out as much information as they could.

Prescott Valley, Chino Valley, and Prescott all had members on the Granite Mountain Hotshots. And faced with losing 19 members of his department, Prescott Fire Chief Dan Fraijo choked back tears as he talked with the media.

Our hearts go out to the families of these men, who chose a career in which they literally put their lives on the line to protect other people's lives and property. We're so grateful that they were willing, knowing that someday they might have to pay the ultimate price.

Also mourning are the many residents of Williamson Valley, whose homes the Granite Mountain Hotshots were directly involved in saving during the recent Doce Fire. Their reaction was one of total shock and grief Sunday as they heard that the men they had come to know and admire lost their lives in yet another effort to stop a terrible wildfire.

Various benefits and memorials are being organized now for the firefighter's families and for the residents of Yarnell and surrounding areas who have had to evacuate from their homes. Keep an eye on PVtrib.com and our sister site, dcourier.com for a list of these benefits and more news as it becomes available.