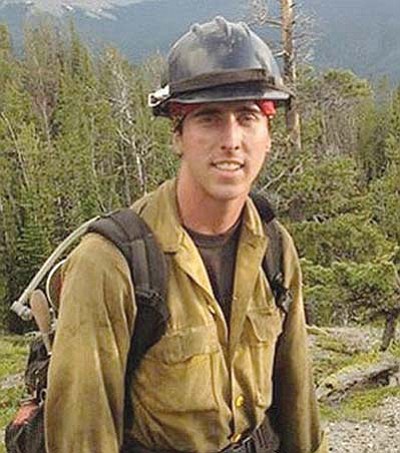 Courtesy photo<br> Brendan McDonough, who was the lookout for the Granite Mountain Hotshots on Sunday, was the lone member of the crew to survive.

Brendan McDonough was the lone Granite Mountain Hotshots crew member who survived when wind-whipped flames on the Yarnell Hill fire shifted and killed all the other 19 crew members Sunday.

He might have perished without the luck of hitching a ride with another hotshot crew, fire department spokesman Wade Ward said.

The Prescott Fire Department released McDonough's name Tuesday afternoon. The 21-year-old graduated from Prescott High School and is in his third season with the hotshots. He does not want to speak to the media at this time, Ward said.

Ward also said that the remaining 19 hotshot crew members sent out their last radio communication at 4:35 p.m. Sunday to say they had deployed their fire shelters.

McDonough was a lookout for his crew, standing on higher ground to watch weather and fire conditions and take weather measurements approximately every 15 minutes. He was in a different location than the rest of the crew, a common situation for lookouts since they need to find spots where they can get a better view of the fire and weather.

McDonough saw a monsoon storm over Prescott about 20 miles to the north Sunday afternoon, and noticed wind patterns were shifting so the backing fire started pushing toward the firefighters, Wade related.

McDonough immediately radioed his crew members to inform them of the changing conditions and then started moving to a safer position, Ward said.

"That was his last communication he had to the crew," Ward said.

"It's a moving point for everybody," he explained. "We make trigger points all day long."

McDonough headed down the hill and started walking along a bulldozer line when he came upon the Blue Ridge Hotshots buggy and hitched a ride away from the flames to a safety zone, Ward said.

"Otherwise, he probably wouldn't have made it out, either," Wade said.

The rest of the crew created a safety zone by clearing brush, Wade said.

The fire shelters are a last resort for wildland firefighters.