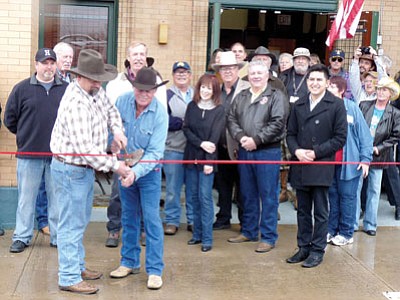 Despite the overcast and drizzly weather, "more than 100" or "nearly 200" people - depending on who was doing the counting - showed up this past Saturday to celebrate the grand opening of the Dewey-Humboldt Historical Museum on Main Street, Humboldt.

D-H Historical Society President Kevin Leonard and Vice President John Young cut the ribbon in front of the museum, which had a soft opening Dec. 27. D-H Mayor Terry Nolan, Yavapai County Supervisor Tom Thurman, Leonard and Young shared their thoughts with the crowd. The museum also received a certificate from Congressman Paul Gosar's office for the hard work and achievement of the opening of the museum.

The Phoenix Chapter of the Gold Prospectors Association of America gave demonstrations on the art of panning, and also donated a gold nugget and two gold prospector videos for a raffle with all proceeds going to the museum.

"The D-HHS worked hard to get this museum going," said Historical Society board member Sue Palacios. "Without everyone working together as a team, this dream would not have been achieved."

She estimated donations collected on Saturday to be about $500.

The museum is open from 10 a.m. to 4 p.m. on Thursdays, Fridays and Saturdays. Membership is $10/person or $20/family, and currently numbers about 90 active members.