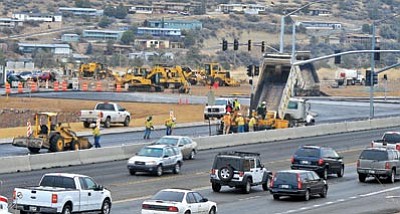 PRESCOTT - Preparation work is nearing completion on the two state highways that will be linked by the long-awaited tribal connector.

And that means that the new connector between highways 69 and 89 could be ready to open to traffic within the next two to three weeks.

Tricia Lewis, senior community relations officer for the Arizona Department of Transportation (ADOT), reported Thursday that workers expect to finish paving work today - weather permitting - on the widening project that has been under way for months on Highway 69.

The work, which will widen a section of the highway from four lanes to six, was necessary prior to the opening of the new connector.

With this week's expected completion of the paving, Lewis said workers likely would begin on Monday to remove the barriers that have been in place between the highway and the construction area.

That will set the stage for about a week of night work on road re-striping and activation of the two new traffic signals. Lewis said crews plan to work from 7 p.m. to 5 a.m., Feb. 3 through 8 on the final preparations.

While the bulk of the work will take place at night, Lewis said it could lead to some left-turn restrictions for daytime traffic.

On the other side of the connector, Lewis said the Highway 89 traffic signal is in place, but is awaiting work by Arizona Public Service (APS) for activation of the new light. She expects that work to take place within two to three weeks.

"By then, all of the work should be complete on Highway 69," Lewis said.

ADOT Assistant District Engineer Bob LaJeunesse had reported in early December that preparation work included the installation of a new traffic signal on Highway 89 at the connector intersection (at Sundog Ranch Road).

In addition, crews were installing new signals at two already-signaled intersections on Highway 69 - at the Target entrance, and at the Frontier Village entrance near the old Walmart location.

While the west-Frontier Village signal is begin designed for four-way traffic, LaJeunesse said its northern leg would be "stubbed out," and would not be active until future development at the site requires the fourth leg.

Although the construction on the new tribal connector has been complete for more than a year, an update of the tribe's 2005 traffic study and a resulting change in the adjacent highway work reportedly has pushed off the connector's opening.

Yavapai-Prescott Tribe officials were unavailable for comment this week on the details of the connector's opening date.

Meanwhile, work also is progressing on plans to widen about eight-tenths of a mile of Highway 69 between just past the Target intersection and the Lamb auto dealership near the Prescott Gateway Mall.

In September 2012, members of the Central Yavapai Metropolitan Planning Organization (CYMPO) pointed out that the Frontier Village-area widening would leave a small four-lane island on Highway 69 near the mall.

This week, CYMPO - a regional-transportation planning organization - approved transferring $400,000 of planning money to cover the cost of a project assessment for the widening of that stretch of Highway 69 from four lanes to six lanes.

The transferred money previously had been earmarked to plan for a future Highway 169-to-Fain Road connector.

Prescott Councilman Chris Kuknyo, who has pushed for the Highway 69 widening, said the transfer was a "common sense" move, because it would deal with a current problem rather than for a project that is likely years in the future.

"Especially with the population projections that were revised recently, it shows that that's not an immediate need," Kuknyo said of the 169-to-Fain-Road connector.