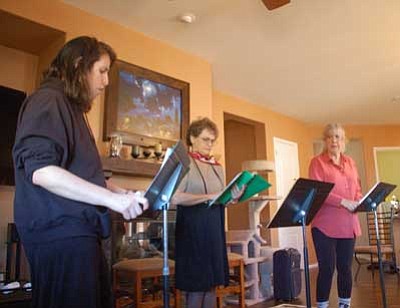 Cindy Barks/The Daily Courier<br> Local actresses Rebecca Antsis, Julie Cargill, and Jean Lippincott, left to right, rehearse a scene in the military drama, “This We’ll Defend” Sunday morning at the home of Janel Taylor, the play’s director. The “readers’ theater” rendition of the play will open this week at the Peregrine Book Company in downtown Prescott.

While writing her military drama, "This We'll Defend," playwright Anita Simons faced a difficult choice: Deciding which of the many tragic stories she should highlight.

While she knew she wanted to focus on the plight of women in the military, Simons also came across wrenching issues such as traumatic brain injuries and post-traumatic stress disorder.

"There's so many sad stories," Simons said in a telephone interview this week from her home in La Jolla, Calif.

Ultimately, she crafted a story that was drawn partially from the account that a real family related to her about their daughter's ordeal as a rape victim in the military.

The play, which is Simons' seventh, will come to life this week in a "readers' theater" (with actors holding their scripts) rendition at the Peregrine Book Company in downtown Prescott.

Director Janel Taylor and her cast of seven were busy over the weekend perfecting the upcoming performances.

Central to the story are two mothers grappling to come to terms with their similarly devastating losses in vastly different ways. Interspersed with the present-day conversations are flashbacks of their daughters' enlistments, deployments, and military experiences.

Through its multiple scenes, the play touches on often-taboo issues such as rape, suicide, and PTSD.

Taylor - the daughter of a Vietnam veteran, and the sister of a current soldier in the Army - said she was drawn to "This We'll Defend" because of its unflinching look at real-life challenges.

"It shows issues that go on in the military that aren't that bright," said Taylor, adding that she hopes the play will help to raise awareness about "what we can do to support military families."

After recently completing the Prescott Center for the Arts' (PCA) director's mentorship program, Taylor was relishing her experience with "This We'll Defend." An aspiring actress since she was 13, Taylor said of her first role as director: "I'm loving it."

The actors, who have appeared in a variety of previous PCA performances, showed an obvious affinity for their characters.

Rebecca Antsis, who played Izzy in the October 2012 PCA production of "Rabbit Hole," takes on the role of Samantha, the young soldier who deals with her anguish by writing poetry.

Prior to taking on the role, Antsis said she saw the documentary "Invisible War," an Oscar-nominated film that deals with sexual assault in the U.S. military. "I think it's definitely an issue that should be brought to the surface," Antsis said.

Fellow actress Jean Lippincott said she draws on her past experience as a therapist to bring to life the role of one of the grief-stricken mothers.

"The subject matter is difficult but the roles are a dream for actors," Lippincott said. "We can really sink our teeth into them."

Jon Meyer, director of Prescott Center for the Arts, calls the play "a very raw and provocative look at the military, their families, PTSD, murder, suicide."

The play is free, and donations will go to Prescott Center for the Arts.

Simons said she plans to be on hand for the weekend performances, and a talkback with the playwright will take place on Jan. 26 and 27.

In addition, Sharon Johnson, a military sexual trauma specialist at the Prescott VA Medical Center, will be debriefing the audience after each performance.