How do we stop mass shootings? Public views mixed on solutions 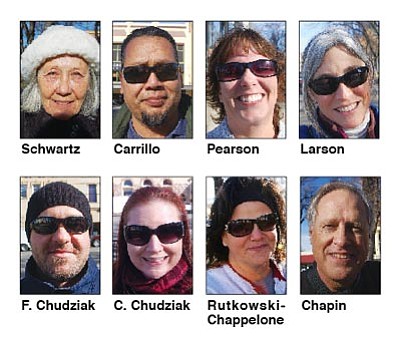 PRESCOTT - Improved security, posting armed volunteers and others at public schools, and better screening for the mentally ill were among the suggestions nine people made Sunday to curb gun-related violence in the schools.

Only two of eight people whom The Daily Courier interviewed Sunday afternoon at the Yavapai County Courthouse Plaza - and one over the phone - called for resuming a ban on assault weapons.

Schwartz said metal detectors could have prevented an incident Thursday in which a 16-year-old boy used a Winchester 12-gauge shotgun to shoot a classmate at Taft Union High School in California. A teacher persuaded the suspect to put down the gun, and Kern County Sheriff's deputies booked him into juvenile hall Friday on two counts of attempted murder and one count of assault with a deadly weapon.

"I don't have any kids in school, but I think our security system needs to improve," Schwartz said. "I'm not against guns."

Dale, a retired internist, mentioned Jared Loughner as an example of a mentally ill person who should not have had access to guns. Loughner is serving a life sentence for killing six people and injuring 13 others, including former U.S. Rep. Gabrielle Giffords, two years ago in Tucson.

Dale, who said solutions to gun violence should not focus solely on schools, expects the panel that Vice President Joe Biden heads will come up with about a half-dozen recommendations.

Sharon said she does not expect to see any action from Congress until gun violence affects its own members.

Albert Carrillo, owner of a landscape contracting company in Phoenix, said he would favor posting armed guards at public schools.

"At least they have a chance at some type of survival," Carrillo said, referring to students. He added he supports a plan from Maricopa County Sheriff Joe Arpaio to post armed volunteers at school perimeters.

"We should have some kind of protection, like a posse," he said.

Arming teachers is a possibility, said Monica Pearson, a Phoenix resident who works in quality monitoring for a collections agency.

Pearson said she would favor arming teachers if they underwent training and counseling. She recalled attending Agua Fria High School in Avondale during the early 1990s when a student sitting behind her in class carried a gun in his backpack. School officials suspended the youth.

Medical assistant Lisa Larson of Prescott asked rhetorically, "How the heck do (guns) get into the hands of young teenagers in our schools?"

Larson, who said she sees the pros and cons for gun control, said she thinks parental guidance would be a better preventive measure.

Filip Chudziak, a respiratory therapist from Surprise, and his wife Courtney, a registered nurse, agree with Larson.

They both blamed school shootings on societal failings: "the media, TV, lack of supervision," Filip said.

"I don't think we have a good support system in our culture," Courtney added. "There is a lack of personal connection, the feeling of caring for others. I think that has gone by the wayside."

She called for a better support system for children and young adults.

Filip believes enhanced security is not the solution.

"We can put cops on every corner in every city in this world. I don't think it will help," he said.

She called for stronger gun background checks and revival of an assault weapons ban that expired in 2004.

A mother of two, she said she cried for days after a gunman killed 20 children and six adults Dec. 14 at an elementary school in Newtown, Conn.

Musician Tom Chapin of Hudson Valley, N.Y., would support an assault weapon ban. "My thoughts are that assault weapons don't make any sense in the hands of civilians," said Chapin, who was in Prescott Sunday to perform at the Prescott Center of the Arts. "They are just made to kill people."