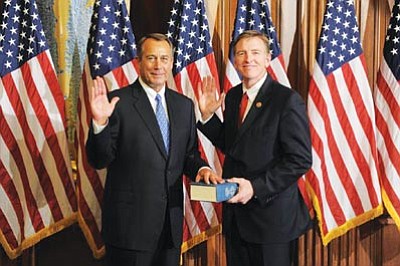 Courtesy photo<br>Speaker of the House John Boehner swears in Paul Gosar to the 113th Congress in Washington, D.C., Thursday.

Gosar won a second term in November after congressional redistricting prompted him to move from Flagstaff to Prescott so he could compete in the Republican-dominated new 4th Congressional District, instead of facing Democrat Ann Kirkpatrick again in CD1. He took her seat away two years earlier. Kirkpatrick then won the CD1 seat in November.

Gosar issued the following statement upon his swearing in.

"When I took my oath of office this afternoon I did so understanding the great responsibility that the people of Arizona's 4th District have placed in me and I will not let them down.

"It is my promise to the people of Arizona that with each vote I will put the U.S. Constitution first and stand up to the business as usual in Washington D.C."