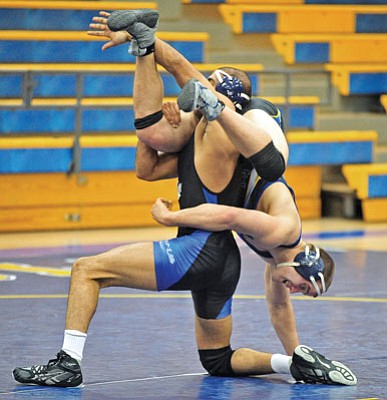 PRESCOTT - After spending the first 1-1/2 months of the 2012-13 season on the road, the Embry-Riddle Aeronautical University wrestling team finally returned to the ERAU Activity Center for its home opener Thursday night.

The Eagles, who have a well-regarded National Association of Intercollegiate Athletics (NAIA) program, hadn't grappled since Dec. 16 at the Las Vegas Desert Duals, where they compiled a 2-2 record.

In its initial competition back from winter break, Embry-Riddle succumbed to NCAA Division II Simon Fraser University of Burnaby, British Columbia, Canada, 29-12, and slipped to 3-7 overall in dual meets.

But that record doesn't bother first-year Eagles coach KC Rock, who's more focused on preparing his grapplers for the upcoming postseason by training consistently and fixing mistakes on the mat.

"My biggest thing is to come in and raise the level (of the program)," Rock said. "I don't want to be just a consistent national qualifying team. I want to be a consistent Top 5 team and bring home All-Americans. Right now we're not quite there, and we're getting there."

Prior to the campaign in mid-October, Embry-Riddle was among 11 teams listed in the "others receiving votes" category of the 2012-13 NAIA Wrestling Coaches' Preseason Top 20 Poll. In the most recent in-season poll Dec. 19, the Eagles remained in that group.

During Ramsey's tenure from 2006-12, he led Embry-Riddle to six straight appearances in the NAIA National Wrestling Championships.

The Eagles, who finished in the NAIA Top 20 in each one of Ramsey's half-dozen seasons, captured the national runner-up trophy during the 2006-07 campaign - a program-best mark.

"A majority of the team has a great attitude about the new coach," Embry-Riddle 165-pound junior Luke Riley said. "Ramsey was my favorite coach in the world, and I loved that guy. But coach Rock has brought a lot of different aspects that we never had that are beneficial to the team as a whole rather than just individuals."

The Eagles forfeited at 125 with All-American/NAIA West Group No. 2-ranked junior Sean Silva not returning until next week because of a bruised tailbone. And Embry-Riddle forfeited at 184 because it doesn't have a wrestler to fill that hole.

Gutknecht said ERAU has been practicing twice a day every day over winter break with a focus on the postseason.

"We're lifting every morning and wrestling every night," he said. "We might be a little bit sluggish, but we're all preparing for regionals. That's where it counts."

Simon Fraser, which became the first non-U.S. member of the NCAA this past August, traveled from western Canada to Arizona earlier this week for the ERAU dual and the Desert Duals Saturday in Phoenix.

However, two members of the Clan had already faced off against the Eagles last month.

In the Battle of the Rockies at the University of Great Falls (Mont.) Dec. 2, Simon Fraser's Gurjot Kooner pinned Embry-Riddle's Elliot Taylor in the 285-pound classification. And, at 125, the Clan's Skylor Davis defeated Silva by decision in the tournament's quarterfinals.

ERAU still has some competition on its regular-season schedule.

The Eagles will battle NCAA D-II Chadron (Neb.) State College in a dual at 4 p.m. today at Tim's Toyota Center in Prescott Valley as part of the inaugural Mile High Challenge. They'll then travel to Albuquerque, N.M., for a dual against NCAA D-II New Mexico Highlands University on Sunday afternoon.

ERAU closes out the season with three straight showdowns at the Activity Center, including the Mile High Duals at 1 p.m. on Jan. 18, the Mile High Open all day on Jan. 19, and a dual vs. current NAIA No. 3-ranked Great Falls (Mont.) at 7 p.m. on Jan. 31.