Column: Hawaii is a paradise - especially for birders 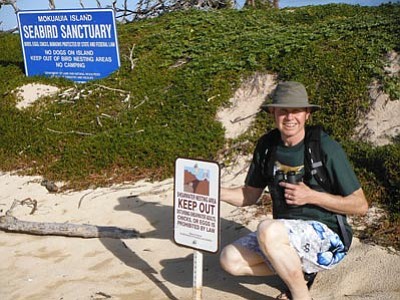 Aloha from beautiful Maui! By the time you read this I will already be back in Prescott, but I wrote this column while in Hawaii earlier this week. My wife Gayla and I spent a few days in Oahu before flying to Maui for a few days. As you might imagine, the focus of my time and energy has been on finding new birds for my life list. I have had some really wonderful experiences.

One highlight this past week was seeing - for the first time in my life - an albatross and a noddy. Open seas and ocean-going birds are referred to as pelagic species. I searched for other pelagic species, as well, including petrels and shearwaters, but was unsuccessful. It turns out a lot of these birds have not returned from where they spend their winters. Silly birds, why would they ever leave Hawaii?

It is almost embarrassing to admit that I have very few pelagic birds on my life list - but hey, I have lived in Arizona almost my whole life, so I have a good excuse! When I was preparing for the trip, my sister, who lives at Turtle Bay on the island of Oahu, told me to bring flip-flops. When I told her I didn't own any, she asked, "What do you wear to the beach?" I just laughed and laughed and responded, "We don't have any beaches in Arizona!"

Some of the new birds I saw are species that migrate between Alaska and Hawaii each year. No small feat when you consider that once these birds leave land in Alaska, they fly non-stop until they reach Hawaii as there is no place for these birds to stop and rest as they migrate.

One of my most treasured experiences on the island of Oahu was meeting a man named Phil Bruner. He is the director of the Natural History Department for the Brigham Young University Hawaii campus. Phil has a PhD from Louisiana State University in Zoology and he specializes in birds. Needless to say, I was very happy that I could meet Phil and go birding with him on the north shore of Oahu, between the town of Kahuku and Turtle Bay.

I was hoping to see a very rare bird species - the bristle-thighed curlew. I had looked for it on my own earlier in the week, unsuccessfully, but Phil was able to take me right to the spot where they winter - in the James Campbell National Wildlife Refuge. The refuge is currently closed to public access, but we birded from the perimeter of the refuge, looking in.

Bristle-thighed curlews are very rare, as there are only about 2,500 left in the world! Approximately 70 of these birds winter each year in and around the refuge where they fatten up in preparation for their return flight to Alaska where they breed and rear young.

While searching for the curlew we found another rare bird - so rare, in fact, that it is not even listed in the Hawaii Audubon Society's book "Hawaii's Birds." We found a great-crested tern, which was another new bird for my life list. Needless to say, I was very happy.

Seeing several Laysan albatross in a nesting colony at Ke'ene Point Natural Area was a real highlight for me. These large birds are masters of the wind. With long thin wings, they fly over the Pacific Ocean for months at a time without coming to land - at all.

I'll share more next week about birding in Hawaii.