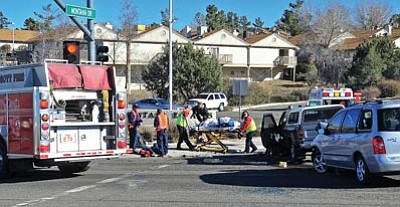 Matt Hinshaw/The Daily Courier<br>Emergency workers transport an injured person to a Life Line Ambulance Tuesday afternoon after a three-vehicle collision at the intersection of Montana Drive and Willow Creek Road in Prescott.

The impact drove them into a Hyundai car driving in another lane northbound on Willow Creek, Morley said.

No one in the Hyundai was injured.

Prescott Fire and Life Line Ambulance paramedics treated the man driving the Toyota for lacerations and he was placed in a neck brace and taken to YRMC for further treatment. The woman driving the Mazda was taken to Yavapai Regional Medical Center for treatment, and was cited for failure to yield while making a left turn.